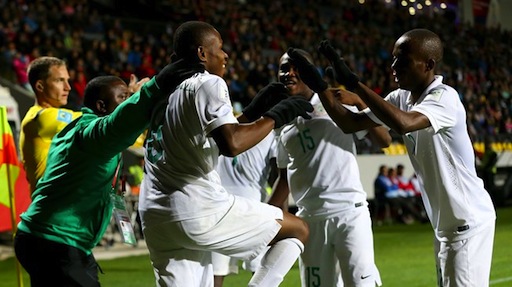 The Golden Eaglets of Nigeria will have their hands full when they confront Brazil in Sunday’s quarter final match of the ongoing FIFA U-17 World Cup.

The crucial game scheduled for Estadio Sausalito in Vina del Mar, Chile is one of the three hurdles the Nigerian lads have to scale before making history as the first African nation to win the cadet tournament five times, having won the maiden edition in 1985, and won again in 1993, 2007 and 2013. Their opponents in Sunday’s game, Brazil have won in it thrice.

Emmanuel Amuneke’s team had an excellent performance in the Round of 16 tie against Australia. The Golden Eaglets saw off the Aussies in a dominant outing, with Victor Osimhen scoring the first hat-trick of Chile 2015 to see him stand alone as the outright top goalscorer in the competition so far with seven goals.

Brazil on the other hand had a narrow 1-0 win over New Zealand to set up a quarter final cracker against the defending champions that has been described by football pundits as the ‘Clash of the Titans’.

FIFA in its report Saturday says “Vina Del Mar has been a kind venue for A Seleção in the past, playing host to four of Brazil’s games in their victorious FIFA World Cup campaign in 1962, with that trend continuing with two victories at the Estadio Sausalito during Chile 2015.

Nigeria stand in the way of Carlos Amadeu’s men continuing their charmed streak in Vina, and the imperious Victor Osimhen will be giving Brazil’s defenders restless nights ahead of the quarter-final. The Nigerian No. 9 has scored seven goals in four games, but this game is remarkably the first meeting between the two sides at this level.”

When they met at the pre-tournament game in the Suwon 4-Nation Invitational Championship in South Korea, Nigeria had the upper hand, beating the Brazilians 2-1, but Coach Amuneke was quick to downplay this victory, saying the World Cup is a different ball game. He added that his boys are battle ready to give their opponents a good run for their money.

“We are candidates to win the title, but so are Brazil. We will work to put up a good fight. We have seen the stuff they are made of but it would be a totally different ball game on Sunday because this is a World Cup match and not a friendly match or a pre-World Cup tournament, ” said Amuneke.

One of the Eaglets, David Enogela, a midfielder, said the team have put their victory over Australia behind with focus on the tie against Brazil.

He said: “We have put the match against Australia behind us. The most important match for us is against Brazil on Sunday and we are going to do our best.”

Other players Coach Amuneke will bank on to save the day for his side apart from Enogela and Osimhen include Akpan Udoh, Lazarus John, Ejike Ikwu, Lukman Haliu and captain Kelechi Nwakali.

Meanwhile, Coach Manu Garba, who won the U-17 World Cup for Nigeria in 2013 in United Arab Emirates UAE, wants the Eaglets to approach Sunday’s quarter-final match with the same intensity that saw them put six goals past Australia in their last match.

Garba, who won the 2015 African U-20 Championship for Nigeria in March this year, stressed the importance of keeping a disciplined and compact shape as they battle the South Americans.