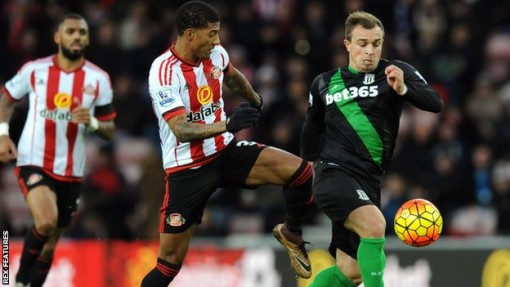 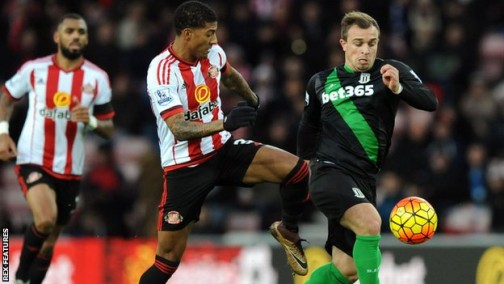 Sunderland lifted themselves out of the relegation zone with just their third Premier League win of the season, as two late goals saw off 10-man Stoke.

The Potters had held firm despite Ryan Shawcross being sent off but Patrick van Aanholt and Duncan Watmore struck with two goals in the last 10 minutes.

Shawcross was dismissed for a second yellow after a foul on Watmore, who replaced the injured Jermain Defoe.

Stoke, who went closest through Jonathan Walters, slip to 12th.

Stoke went into the game unbeaten in their past four away matches – and had won three of those 1-0 – but finally conceded when wing-back Van Aanholt fired home from the edge of the box after a free-kick was played short.

Sunderland had an extra man for almost the whole of the second half and frustration had been building, but the home fans could finally relax when Watmore sealed the win, finishing low across Jack Butland after a driving run.

The Black Cats were without a win when Sam Allarydce took over in October and they continued their revival here.

With his team still to play Arsenal, Chelsea, Manchester City and Liverpool before the new year, these hard-won three points could prove vital.

But do Sunderland need another striker?

Watmore was full of running throughout, and provoked the foul by Shawcross that saw the Stoke defender dismissed, but had until then been guilty of spurning chances.

With Defoe withdrawn before the break, having suffered an apparent thigh muscle injury, the Black Cats struggled to make their numerical advantage tell.

Steven Fletcher had a limited impact, too, and the striker had several weak penalty appeals dismissed.

Allardyce will be hoping Defoe – the club’s top scorer with seven goals this season – will be fit for what looks like being a very tricky run of fixtures.