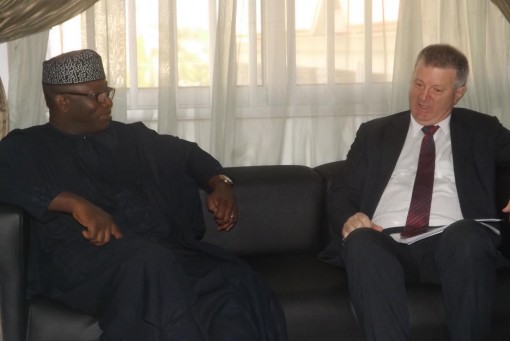 The Federal Government would understudy the Australian mining sector in the bid to reposition the country’s solid mineral sector, Minister of Solid Minerals Development, Dr Kayode Fayemi, has said.

Fayemi said the country needs to learn how Australia has been able to drive its country’s mining sector, which accounts for 8.5 per cent of the country’s GDP and employs about two per cent of the work force as the present administration is set to improve the nation’s economy through the sector.

Speaking in Abuja during a courtesy visit by the Australian High Commissioner to Nigeria, Jonathan Richardson, to his office on Friday, Fayemi said the increasing interest of the government is geared towards understanding the Australian mining sector and coming up with an approach that will be profitable to Nigeria.

He said: “We need to learn how you have been able to particularly drive the Australian mining industry. The president is really very focused in this sector; not that we have choices anyway with the prices for petrol dollar dwindling, so we have to look at alternatives for raising revenue for the country and clearly for the president, agriculture and solid minerals appear to be the most realistic or fastest way to begin to raise additional revenue for the economy.

“The increasing interest of our government has made me get in touch and connect with what you are doing in your mining sector. Everything I have heard in the last 10 days of being in this position points in the direction of Australia. Everybody is saying it to me factually, technically, commercially, I keep hearing, you get Australia, you fix the mining sector.

“Another area that we really can learn from Australia is you are a federal entity like us, we do have significant tension between what the constitution says about mineral resources belonging exclusively to the federal authority and the management of land belonging to the state government. So, we need to find a sharing formula mechanism, what royalties come to those who own the land, the community, state government and then the federal in order to achieve synergy and corporation because increasingly, I am hearing stories of those trying to explore minerals from local communities and facing a number of challenges there. We will be interested to know what Australia has done about it.”

Earlier, the Australian High Commissioner said that his country would like to cooperate with Nigeria in the areas of technical training and support as well as other areas the government might require. He added that over 100 Nigerians had taken advantage of short professional courses in specialized areas in Australia since 2010.

Richardson who stressed that Nigeria is well endowed with mineral resources, stated that security, rule of law, law enforcement, policy consistency as well as cheaper and reliable power supply would play significant roles in building and sustaining investors’ confidence in the Nigerian mining sector.