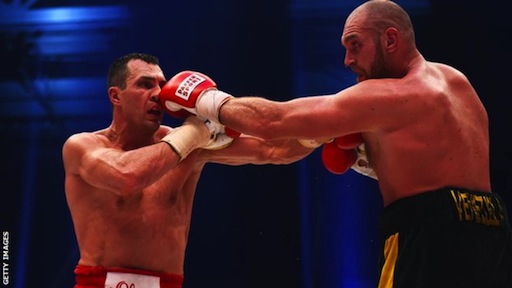 Wladimir Klitschko says he will fight Tyson Fury again next year, having lost his world heavyweight titles to the British fighter in Dusseldorf.

Manchester’s Fury, 27, pulled off one of the biggest upsets in heavyweight history, outpointing Klitschko and bringing his nine-year reign to an end.

There was a rematch clause in the fight contract, but it is yet to be decided whether Germany or the UK will host it.

“I lost the battle but the fighter is still in me,” said Klitschko.

“We’ll soon work out when and where the rematch will take place and let you know,” he added.

Fury replied: “I’m a fighter, so I will take on all challengers. I want to be a great champion and I’d like to do it all again. Who knows what the rematch holds? One thing I can say about it is that it’s going to be explosive.”

Fury won by a unanimous decision at the 50,000-capacity Esprit Arena to wrest the WBA, IBF and WBO belts from the 39-year-old Ukrainian.

And while he was happy to trash-talk his rival during the build-up to the fight, afterwards he was full of respect for “a great champion”.

“If I could be half as good a champion as Wladimir Klitschko I would be very, very happy,” said Fury, who is Britain’s fifth bona fide world heavyweight champion, after Bob Fitzsimmons, Lennox Lewis, Frank Bruno and David Haye.

“He put up a really good fight. I found him quite awkward to land clean on, as he did me. He landed some great punches but it just wasn’t his night.

Asked why he threw so few right hands – Klitschko threw only 18 power punches in the entire fight – the beaten man replied: “My right hand was not injured. I should have thrown more right hands, but after throwing left hands, I couldn’t find the distance and land as many as I wished.

“I wish I could have landed more clean shots. Tyson was quick with his hands and his body movement, and I couldn’t land the right punches.”

Fury said he would celebrate his win in sedate style with his family, including wife Paris, who found out on Friday that she was pregnant with their third child.

“I packed up drinking and having a good time, all the things that are supposed to be the great things in life. I’m not interested in them,” said Fury.

Vitali Klitschko, himself a former heavyweight world champion and now the mayor of Kiev, said he was shocked by how badly his younger brother performed.

“I know how good Wladimir is and Wladimir did not show how good he is [against Fury],” said Vitali. “I know his strengths but I couldn’t see any of it.

“Maybe it was just a bad night and I’m quite sure Wladimir will take the rematch chance and show the world who the real Wladimir Klitschko is.”

Fury’s trainer, his uncle Peter, said his charge would get even better and predicted the result of the rematch would be the same.

“Tyson can raise his game. This was his first big test. Now he has come through that test, you will see more of his boxing ability,” he said.

“You are seeing a future heavyweight sensation. We are looking forward to the rematch and if we have to come to Germany again, we will.”