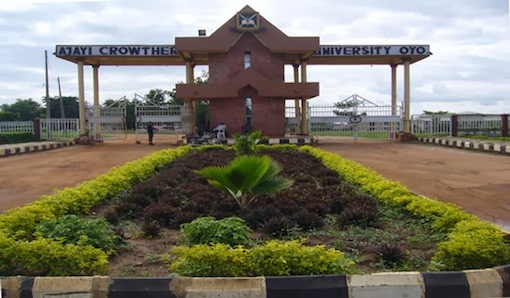 Ajayi Crowther University in Oyo, Oyo State, would be graduating 11 first class out of the 370 graduands at its forthcoming 7th Convocation slated for December 5.

The university’s Vice-Chancellor (VC), Prof. Dapo Asaju, said this at a news conference held at the institution on Monday to herald the convocation.

He said that 68 of the graduands bagged second class upper, 166 made second-class lower, while 113 students graduated with third class.

NAN reports that the convocation would take place in the Faculty of Law building, donated by the family of Chief (Mrs) Folorunsho Alakija.

Asaju said that a convocation-lecture would be delivered at the school auditorium on December 4 by Prof Jide Alo, Deputy Vice-Chancellor (Academic and Research), University of Lagos.

The theme of the lecture is, “Faith Based Universities and National Development: Towards a Mandate Re-Appraisal”.

He said that the institution, which was granted licence in 2005, was named after Samuel Ajayi Crowther, a renowned black African and first black bishop in the world.

Asaju, who described Crowther, as one of the nation’s greatest personalities in history, commended former President Olusegun Obasanjo for his incisive sense of history, which led to the name of the school.

Asaju , who recalled that he assumed duty on Oct. 2 as the third V-C of the institution, added that the management had since been pre-occupied with how to repackage the university.

According to him, the repackaging was for more positive image for the university and make it a force to reckon with across the world.

Asaju said that the institution would soon commence its post- graduate programmes, adding that 70 per cent of its approved post-graduate courses would take-off by March, 2016.

“We have also concluded plans to start the Department of Environmental Sciences.

Also, we have 110 hectares of land along Oyo-Ogbomoso Expressway where we hope to start our Colleges of Medicine and Agriculture.

“There, we expect that the 64 dioceses will erect at least a building as part of our expansion programme,” he said.