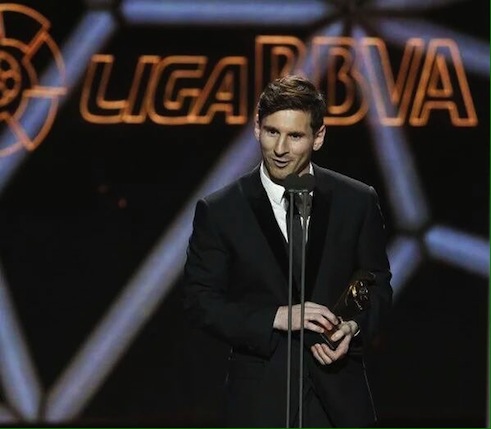 The same day he was nominated for FIFA’s prestigious Ballon d’Or title, he was also crowned the top forward in the Spanish league last season ahead of Real Madrid rival Cristiano Ronaldo.

It was the sixth time that the Argentinian has won the title in seven editions of the trophy given by the Spanish football league, with the prize presented during a gala ceremony in Barcelona on Monday night.

Messi, who scored 43 goals and was the catalyst for Barcelona’s run to three titles last season – the UEFA Champions League, La Liga and the Spanish Cup – was selected following a computer analysis of the players’ statistics in the championship.

“I’m proud to receive this award ahead of so many important players in La Liga,” said Messi.

“This award in particular I want to dedicate to my son Thiago (aged 3) even if he still doesn’t understand very well. Every time I leave the house he gets angry and asks me: ‘Papa, are you going again to score goals?’ This award is for him.”

Messi also won the vote for the best forward following a poll of the captains of each of Spain’s top flight sides.

Ronaldo, Messi and Neymar were all named on Monday’s shortlist for FIFA’s Ballon d’Or which will be awarded on 11 January.

While Ronaldo has triumphed over the last two seasons (in a total of three wins), Messi has previously claimed the coveted award four times while Neymar makes the shortlist for the first time. Neymar, 23, said it was “a great honour” to be named for the first time alongside his illustrious La Liga rivals.