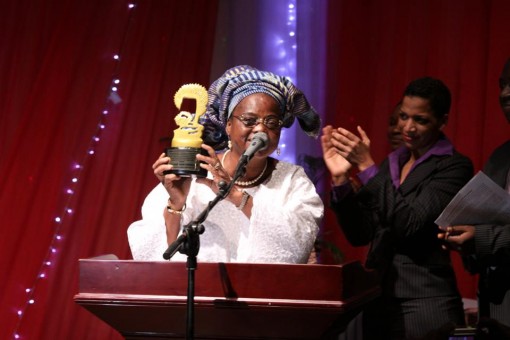 One of the Wole Soyinka Award winners displaying her award.

Attahiru Jega, erstwhile Chairman of the Independent National Electoral Commission (INEC), and Professor of Political Science, who played an outstanding role in the success of the 2015 elections and veteran broadcaster, Bimbo Oloyede, will be honoured with the Anti-Corruption Defender Award and the Lifetime Award for Journalistic Excellence, respectively, at the decade anniversary of the Wole Soyinka Award for Investigative Reporting, scheduled for Wednesday 9 December, 2015 by 5pm at the MUSON Centre, Onikan, Lagos.

In his acceptance note to the Coordinator of the Wole Soyinka Centre for Investigative Journalism, Motunrayo Alaka, Jega appreciated the organisation for finding him worthy of the award saying, “Such an honour from a Centre named after the great and revered Wole Soyinka is of considerable significance.”

On her part, Oloyede, who earlier in the year celebrated her four-decade anniversary in broadcasting, highlighted her delight at seeing that she has been placed on the same pedestal with past winners of the award whom according to her, are individuals who have made great contributions to journalism in Nigeria.

In her words, “From my interaction with the Centre, it is clear that a lot of good work is being done to uplift our craft…nothing would give me more pleasure than to accept the Centre’s kind recognition and honour.”

As part of the tenth anniversary and in commemoration of the human rights day, as well as the ‘orange the world’ sixteen-day campaign to end every form of violence against girls and women, the WSCIJ will also host a public viewing of its documentary, ‘Report Women: The Untold Stories of Girls and Women in Nigeria’ on Thursday 10 December, 2015 by 12:30pm at the Silver Bird Galleria in the Ikeja Mall, Alausa, Ikeja, Lagos.

The 2015 award presentation event will this year have Professor Wole Soyinka give the keynote remark. The programme, which is supported by Chevron and the Netherlands Embassy, will also see twelve finalists receive commendations and awards in different categories at the prize presentation ceremony on Wednesday, 9 December at the MUSON Centre. Attendance at the award event and documentary viewing are open to members of the public.