Benzema, Bale, Ronaldo on target as Madrid down Getafe 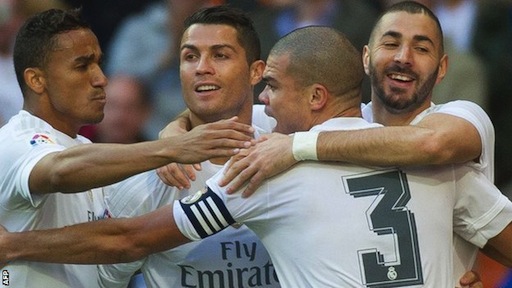 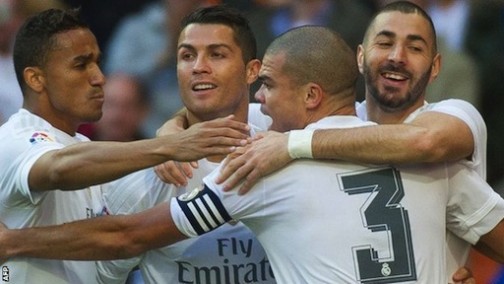 Real Madrid bounced back from their Copa Del Rey expulsion by beating Getafe in La Liga as Karim Benzema scored his first goals since October.

Benzema, recalled to the side, volleyed home Pepe’s cross, then slotted in a second from a Gareth Bale pass.

Bale fired in a third after being set up by Cristiano Ronaldo, who added a fourth before half-time.

The result lifted them above neighbours Atletico Madrid, who were playing later away to Granada, into second spot.

It also helped lift the gloom that had descended over the Bernabeu in the wake of last month’s 4-0 home defeat by Barcelona and this week’s expulsion from the Copa del Rey, which was imposed after they fielded an ineligible player.

Manager Rafael Benitez, who took over from the sacked Carlo Ancelotti at the end of last season, was roundly whistled when his name was read out with the team lists before kick-off.

There were more chants during the game calling for president Florentino Perez to step down.

The game marked the first time this season Benzema, Bale and Ronaldo, collectively known as “BBC”, have scored in the same La Liga game.

Benzema, having recovered from a hamstring problem sustained on international duty with France in October, was dropped from the starting line-up after the 4-0 La Liga home defeat against Barcelona on 25 November.

It has been a difficult time for the striker off the pitch in recent weeks too, as he is under investigation regarding an alleged blackmail plot. He has denied wrongdoing.

Real, who are already through to the knockout stages, entertain Malmo in the Champions League on Tuesday before travelling to face Villarreal on 13 December.

Getafe have yet to win away from home in La Liga this season after a sixth defeat in seven matches on the road.