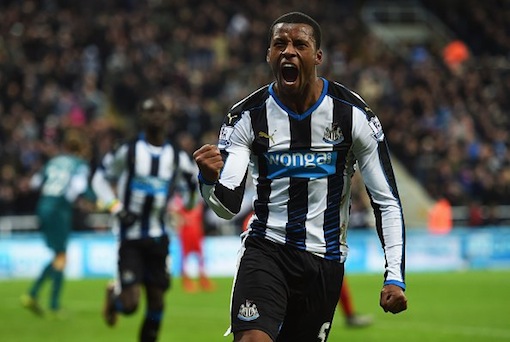 The Magpies moved above Sunderland into 18th place in the table after Wijnaldum’s shot was deflected off Martin Skrtel’s knee, before the Dutchman added a second late on.

Liverpool, who had won seven of their last eight games, were poor.

Alberto Moreno was wrongly denied by an offside flag as Reds boss Jurgen Klopp suffered a second defeat in 12 games.

But in a scrappy game which lacked quality, Newcastle achieved a much-needed victory for Steve McClaren, who admitted earlier this week that confidence at the club has been “fragile”.

After conceding eight goals in their last two games, the result came courtesy of a much-improved defensive display from the hosts.

And in Wijnaldum, who took his tally to seven for the season following his £14.5m move from PSV Eindhoven in July, they have a player who has offered the goal-scoring threat they have been previously missing.

Following Liverpool’s 6-1 win at Southampton in the Capital One Cup on Wednesday, Klopp’s reputation at Liverpool reached new heights.

But his decision to make six alterations, including the omission of Daniel Sturridge and Divock Origi, who scored five goals at St Mary’s between them, seemed to backfire.

Winger Jordon Ibe was their best outlet going forward but Christian Benteke was left isolated ahead of him and wasted a good chance from a corner, while Roberto Firmino looked a vastly inferior player to the one who tormented Manchester City two weekends ago.

Once Benteke and Firmino were replaced by Sturridge and Adam Lallana after the hour mark, Liverpool found a better rhythm to their play.

However, Sturridge, playing in only his fifth Premier League game of the season after injury, wasted a good chance to equalise and Moreno was denied a wonderful volley from an angle.

Liverpool did not reach the levels of recent weeks, when they secured away wins at Chelsea and Manchester City, but Newcastle showed a ruggedness and willingness to track back which has been in short supply this season.

Right-back Paul Dummett had a busy afternoon as he came up against the energetic Ibe, but kept the Liverpool youngster at bay, while Vernon Anita and Jack Colback were robust in central midfield.

Elsewhere, forward Siem de Jong, on his first Premier League start of the season, often tracked back to help out his team-mates which helped Newcastle set up a platform for the victory.

Liverpool were more positive once Sturridge was introduced, yet it allowed McClaren’s team to sit back and break, which suited the pace of Sissoko and Wijnaldum, and they combined superbly for the second goal, which sent St James’ Park into raptures.

Stats you need to know