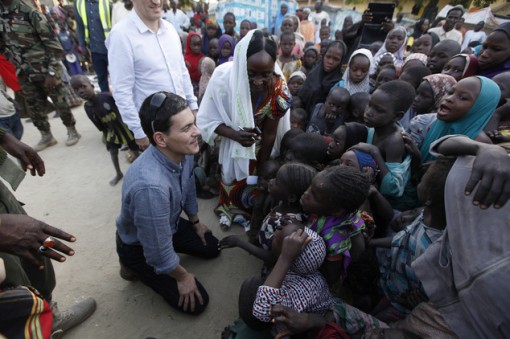 Former UK Foreign Secretary David Miliband, centre, kneels as he listens to children singing "ABC" displace by Boko haram attacks, in a camp in Maiduguri, Nigeria, Monday, Dec. 7, 2015, in the heart of Nigerias war zone. Miliband, now president of the International Rescue Committee, dropped to kneel to make eye contact with children in a refugee camp Maiduguri, the northeastern city that has 1 million residents and 2 million refugees, half of them children. (AP Photo/Sunday Alamba)

Miliband, president of the New York-based International Rescue Committee, dropped to kneel then sat back to make eye contact with scores of delighted children in a refugee camp in Maiduguri, the northeastern city that has 1 million residents and 2 million refugees, half of them children.

On a tour of camps, Miliband told The Associated Press he was saddened that so many children have been orphaned by the 6-year Islamic uprising that has killed 20,000.

Maiduguri is the birthplace of the Islamic extremist group Boko Haram and has been attacked many times. A girl suicide bomber blew herself up at a military checkpoint two weeks ago, killing seven people.

Last week, the military said it arrested an 11-year-old boy trained as a suicide bomber and infiltrated into a Maiduguri camp to attack refugees. It said Boko Haram has infiltrated some camps since troops have destroyed dozens of insurgent strongholds and freed hundreds of captives.

At the makeshift camp set up at a youth corps training center, refugees have built round shelters from grass and plastic sheets, trying to recreate some semblance of their huts back home.

Miliband asked one young boy what he wished for: “I want to go back home,” the child answered, “Help us to get back to our home.”

Refugees told Miliband they want to go home, but only when it is safe.