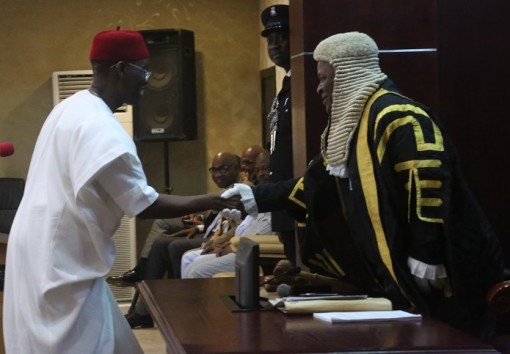 Delta State Governor, Ifeanyi Okowa, Tuesday presented a budget proposal of N265,668,156,174 for the 2016 fiscal year to the Delta State House of Assembly.

A sectoral breakdown of the budget shows that the Delta State Oil Producing Areas Development Commission (DESOPADEC), was allocated the lion share of N28 billion; while Education is allocated N10.1 billion; the state job and wealth creation scheme is allocated the sum of N2.296 billion‎. Others are: Transport sub-sector, N15.421 billion and the Health sector receives N5.9 billion.

The Governor stated that being the first budget that is conceived by his administration, the grim forecasts from these documents place a moral burden on the administration to adopt a pragmatic approach in the 2016 budget estimates based on prudent management of public finances without necessarily playing to the gallery or raising false hope.

He noted that the health of the state’s public finances was crucial to good governance which would inspire hope and confidence, attracting investors, ensure sustainable development of the state’s economy as a whole and maintain the basic principles of prudent management of public finances in strict adherence to due process and keep expenditure within revenue limits.

“The budget is admittedly tight but it is consistent with our vision for maintaining strict fiscal discipline.
‎
“As part of our resolve to avoid the mistakes of the past and ensure that we get full value for every kobo spent the project monitoring and supervision function is being handled by a Directorate under the leadership of the Senior Policy Adviser,” he said.

To this end, the Governor warned that no contractor will get away with any shoddy or uncompleted jobs, because, according to him, it was for this reason that the Economic Intelligence Unit of the Ministry of Economic Planning has been strengthened to enable it discharge its responsibility as the due diligence outfit for Government.

Similarly Governor Okowa observed that the State Executive Council has resolved that from now on, any government official who, either by omission or commission, allows the State to be short-changed in its investment projects, will be severely sanctioned.

He noted that the goal of his administration was for Delta State to become the most prosperous state in the country.

The Deputy Speaker of the House, Rt. Hon. Friday Osanebi, who thanked Governor Okowa for his respect for the legislature and for working in the interest of Deltans, moved a motion for the budget proposal to be accepted as a working document while the member representing Oshimili South Constituency, Rt. Hon. Peter Onwusanya seconded the motion for the adoption of the motion which was overwhelmingly adopted.