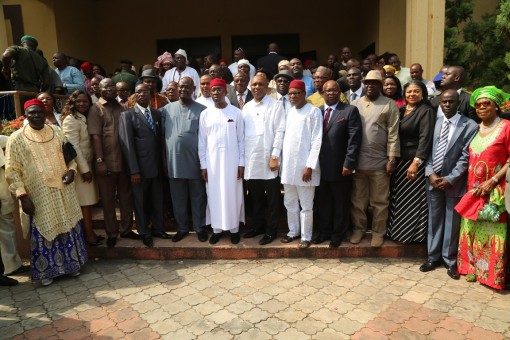 Governor Ifeanyi Okowa of Delta state has inaugurated six Governing Councils, five boards and charged chairmen and members of Governing Councils of institutions of higher learning and boards of parastatals to work harmoniously with their managements to ensure that the desired results were achieved.

While stating that the wisdom that is required is not to know how to draw the lines of authority and work for the synergy essential for the stability of the organization, Governor Okowa emphasized that appointees should be concerned about long term socio-economic development and the general well being of the people.

Governor Okowa said “Members must learn to operate within the limits of their authority, recognizing and accepting the difference between oversight and management; the principle of mutual submission is, therefore, imperative and must be embraced by all.”

Okowa enjoined those inaugurated that they should provide exemplary leadership, offer insight on the organizations’ budgetary priorities and demand compliance with legal and government policy requirements at state and federal levels.

He specifically urged the governing council of Colleges of Education, Agbor and Warri to speed up the process of appointing substantive Provosts for the institutions as stipulated by law.

Responding on behalf of the appointees, Dr. Festus Okubor commended the policy direction of Governor Okowa’s administration, stating, “we feel honoured to share in your dreams and vision for our state, we will do everything possible within our capacity to ensure that your SMART agenda is pursued vigorously to achieve success and we will not do anything to bring embarrassment to your government.”