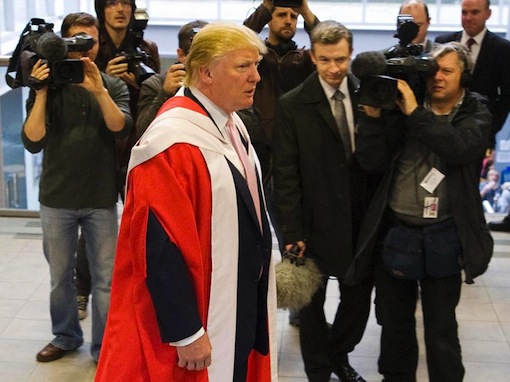 Donald Trump is pictured as he recieves an Honorary award of Doctor of Business Administration at Robert Gordon University in Aberdeen, Scotland, on October 8, 2010 (AFP Photo/Derek Blair)

The Scottish government sacked US presidential hopeful Donald Trump as a business ambassador and a university revoked his honourary degree on Wednesday after he called for a ban on Muslims entering the United States.

A petition to bar the Republican frontrunner from Britain reached more than 358,000 signatures amid an outcry over comments by the tycoon, who owns golf courses in Scotland and has family links to the country.

“Mr Trump’s recent remarks have shown that he is no longer fit to be a business ambassador for Scotland,” a spokesman for the regional government said as he was dropped as a “GlobalScot” ambassador, a position he took up in 2006.

Trump had called for a “total and complete shutdown of Muslims entering the United States until our country’s representatives can figure out what is going on” following a shooting last week that left 14 people dead in California.

Robert Gordon University in Aberdeen announced it would revoke an honorary doctorate of business administration it awarded to Trump in 2010 because of statements “that are wholly incompatible with the ethos and values of the university”.

Remarks by the property billionaire that police feared for their lives in parts of London due to radicalisation also caused a social media outcry and drew the ire of the capital’s mayor, Boris Johnson.

“When Donald Trump says there are parts of London that are no-go areas, I think he is betraying a quite stupefying ignorance that makes him frankly unfit to hold the office of the president of the United States,” Johnson told ITV News.

One tweet carried an image of Queen Elizabeth II wearing a headscarf with the inscription: “Even the British monarch is now forced to wear a hijab”.

The petition to bar Trump from entering Britain will be considered for a debate in parliament, like all petitions that reach over 100,000 signatures.

“The UK has banned entry to many individuals for hate speech. The same principles should apply to everyone who wishes to enter the UK,” the petition read.

The appeal was launched by Scottish resident Suzanne Kelly, a long-time critic of the 69-year-old who was also behind the pressure on Robert Gordon University to revoke Trump’s honorary degree.

Over 75,000 people signed her petition demanding that the university take action because of “Trump’s unrepentant, persistent verbal attacks on various groups of people based on nationality, religion, race and physical abilities”.

Finance minister George Osborne told parliament that Trump’s comments were “nonsense” but added that debate was “the best way to deal with Donald Trump and his views rather than trying to ban presidential candidates”.

One calls on the government “to refuse a visa allowing Donald Trump to visit the UK until Mr Trump withdraws his comments”.

British police issued a rare rebuke after comments by Trump to US network MSNBC claiming there were places in London “that are so radicalised that the police are afraid for their own lives”.

A spokeswoman for Scotland Yard said Trump “could not be more wrong” and invited all US presidential candidates for a briefing “on the reality of policing London”.