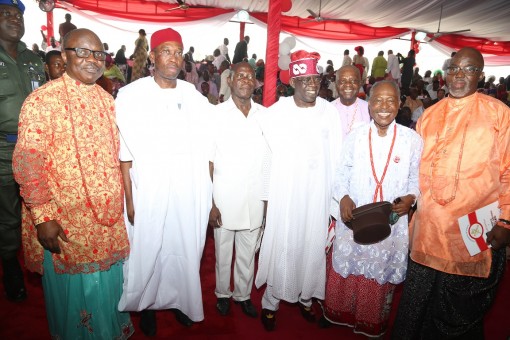 The Itsekiri nation of Delta State on Saturday in a grand display of its rich culture and tradition crowned a new monarch, His Royal Majesty, Ogiame Ikenwoli I as the 20th Olu of Warri.

The ceremony attracted serving and past top government functionaries at Federal and State levels, Governors of Delta and Edo states, members of the National and State Assembly, former governor of Delta State, traditional rulers from within and outside the state, the Diplomatic corps, past governors, All Progressives Congress chieftain, Chief Bola Tinubu, and Minister of State [Petroleum]. Mr. Ibe Kachikwu as well as Itsekiri sons and daughters in Nigeria and in diaspora.

Speaking at the occasion, President Mohammadu Buhari and Governor Ifeanyi Okowa charged traditional rulers to work assiduously to sustain the existing peace and promote unity among ethnic groups in the state in order to attract investment and development.

President Buhari, who was represented by the Secretary to the Government of the Federation, Engineer Babachir Lawal, commended the peaceful emergence of the new Itsekiri monarch and urged people of the Itsekiri nation to remain supportive of the policies and programmes of the Federal Government.

Senator Okowa on his part reminded the traditional rulers that “peace and security is a critical factor for economic growth and sustainable development. We hold the traditional institutions in the state in high esteem, as custodian of our culture and those closest to the grassroots. We count on their counsel and guidance for policy formulation and execution for overall effectiveness,” adding “synergy between the traditional institutions and government is a sine qua non for good governance and sustainable development.”

He urged the new Olu of Warri who was crowned by the oldest man in the kingdom, and Olare-aja of Jakpa, to consolidate on the peaceful co-existence of the various ethnic groups in his domain and make Warri attractive again for investors and companies, asserting that “Our administration is taking steps to woo back some of the companies such as Shell that relocated from Warri due to the atmosphere of insecurity that prevailed in the past. Our efforts in this regards will not yield the desired dividends if there is no guarantee of peace and public safety, hence we must roll up our sleeves and do the work necessary to sustain the peace that we now enjoy in the state.”

Governor Okowa restated government’s determination to tackle the problems of youth restiveness, unemployment, and low agricultural output through its programmes.

In his remarks, the Olu of Warri, Ogiame Ikenwoli I, thanked all those who identified with the Itsekiri nation on the coronation and promised peaceful co-existence among different ethnic groups in the area.

In a goodwill message at the occasion, the Ooni of Ife Oba Adeyeye Enitan Ogunwusi congratulated the Warri monarch and promised to sustain the cordial relationship between both kingdoms.

There were also goodwill messages from other traditional rulers, from within and outside the state.