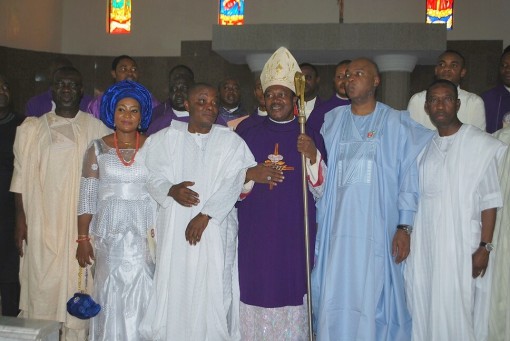 Senate President, Dr. Bukola Saraki and Dr. Ifeanyi Okowa, Governor of Delta State, have jointly called for unity among Nigerians irrespective of language, tribe and religion for the overall development of the country.

Saraki and Okowa made they call when they and principal officers and members of National and State Assembly, top government officials took part in the thanksgiving service in honour of Senator Peter Nwaboshi at the St. Augustine Catholic Church, Ibusa, on Sunday.

Saraki stressed that the Senate leadership was committed to the unity and development of the country, adding that “under our leadership we will do our best for the development of the country, as poverty does not know religion, language, tribe or political party, we will continue to support one another as we tackle the challenges facing the nation.”

On his part, Okowa charged political leaders to continuously use their position to empower the people and develop their areas, asserting that “the moral burden of thanksgiving to God is to continually use our position to help the poor and needy in our society, it is a challenge to all of us to use whatever position we find ourselves to help others in our society.”

He urged the followers to be considerate in making their demands especially in these challenging times.

Governor Okowa, who commended Senator Nwaboshi for his electoral victory and for giving thanks to God for his mercies, called on religious leaders to continue to pray for the country and the state.

Senator Nwaboshi who represents Delta North Senatorial District in the Senate, said that the ceremony was to thank God for his electoral victory and for the support of the people of his senatorial district.

Earlier, in his sermon, the Bishop of Asaba Diocese, His Lordship Most Rev. Michael Elue admonished Nigerians to let their lives reflect their Christian transformation wherever they find themselves stressing that “we owe God a duty to live a Christian life and bloom in whatever fields of endeavour we find ourselves”.