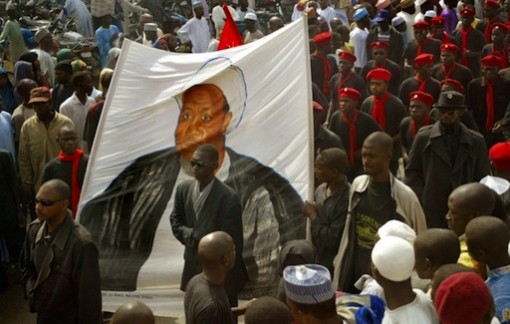 FILE PHOTO: A demonstration staged in northern Nigeria, calling for the release of Ibrahim Zakzaky, depicted here on a banner in Kano, who was detained following a military crackdown on his followers ©Pius Utomi Ekpei (AFP/File)

At least four people were killed on Tuesday when riot police opened fire on Shiite Muslims demanding the release of their leader in Nigerian city of Kaduna, a sect spokesman and residents said.

Hundreds of supporters of the pro-Iranian Islamic Movement of Nigeria (IMN) had been marching through the streets of Kaduna’s Unguwar Nupawa area, calling for the release of Sheikh Ibrahim Zakzaky, who has been detained by the military since Sunday.

“Despite the unwarranted attack, the march forged ahead,” he said.

Residents said they were forced to flee their homes following the attack.

“The whole area was filled with gunshots and tear gas fired by the police on the Shia followers, who were carrying the portraits of Zakzaky and calling for his release,” said local resident Rukayya Rabiu.

“I saw people shot being taken away by the Shiites as I was fleeing the area but I can’t say if they were dead,” she said.

The protest was part of a series of demonstrations staged Tuesday in various parts of northern Nigeria calling for the release of Zakzaky, who was detained following a military crackdown on his followers in the city of Zaria.

The violence in Zaria was sparked when Shiite faithful on Saturday blocked the main road outside their prayer centre, where hundreds had gathered for a ceremony.

The military claimed Shiites attacked a convoy of the army chief, Yusuf Buratai, leaving soldiers no option but to retaliate. The IMN denied the accusation.

The military operation left scores of sect members dead and several injured, including Zakzaky who sustained four gunshot wounds, according to the sect.

Among those killed were Zakzaky’s deputy, his son, a sect spokesman and its head of security.

The crackdown left Zakzaky’s house and two of the sect’s religious centres in ruins.

The IMN seeks to establish an Islamic state through an Iranian-style revolution.

Iranian President Hassan Rouhani has telephoned his Nigerian counterpart Muhammadu Buhari to protest the crackdown on Shiites and call for an investigation, according to media reports.

“An impartial investigation is urgently needed into these killings. Anyone responsible for unlawful killings should be brought to justice,” the rights group said.

Nigeria’s National Human Rights Commission said it has set up a panel to investigate the clashes between the army and the Shiite Muslims with a view to preventing a recurrence.