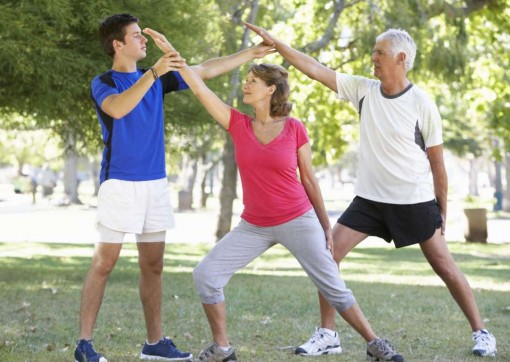 Exercise to keep fit even at old age. © REX/Shutterstock/Rex Images

Want to live forever? Even if you’re not going for immortality, it’s a safe assumption that you want to be around for the long haul. And while 70 or 75 is more than enough time to live a fulfilling life, why not aim higher? As in, triple digits.

Believe it or not, more people are reaching the century mark. According to the latest data from the Census Bureau, nationwide, the centenarian population has grown more than 65% over the past 3 decades. So it’s possible. Of course, genes play a large role in how long you’ll live—people who reach the magical age of 100 are likely to have other relatives who lived exceptionally long lives—but lifestyle factors matter too.

And although there is no instruction manual that will guarantee you see 100 candles on your cake, these habits tend to be popular among centenarians.
Don’t think that most of the 100+ club are sitting at home bored. They may not be out clubbing, but they definitely get out and mingle. Downing Jett Kay, 108, who lives in Towson, MD, has a motto: “Make new friends but keep the old ones.”

She’s involved in her church, a women’s organization, her community, a weekly group meetup to discuss current events, and makes it a priority to spend time with family and friends. And she’s on to something: A study in 2010 found that people with plenty of social connections had a 50% greater likelihood of living longer than people who had few or no social connections.
People who are physically active for about 7 hours a week have a 40% lower risk of dying early than those who are active for less than 30 minutes a week, according to the Centers for Disease Control and Prevention. That applies to seniors, too. They may not be able to run or walk a mile as quickly as they could when they were younger, or hit a personal best when lifting weights, but centenarians make it a habit to work up a sweat often.

Kay’s favorite workouts include walking and using dumbbells and resistance bands. And you don’t have to be a gym rat for exercise to be beneficial to your longevity. A study of a group of Okinawan centenarians found that they got in abundant and consistent physical activity the natural way, for example, by gardening, dancing, walking, and doing soft martial arts like tai chi.

Whether you choose the natural exercise route or get more structured with your workouts, aim to do a mix of aerobic, balance, and muscle-strengthening activities.
Keeping your mind physically fit can stave off some conditions that cut life short, like Alzheimer’s. People who make it to the super golden years give their brains a good workout, just as they do for the rest of their body. Emanuel Chuse, a resident at Atria Senior Living’s Lynbrook, NY, location just turned 100. To keep his mind sharp, he says he makes sure to keep up with the daily news of the world. Edris Mathiesen, 102, who lives at Redbud Hills, a Holiday Retirement community in Bloomington, IN, also makes it a priority to flex her mental muscles. “I love playing cards, doing crossword puzzles, and reading to help exercise my mind.”

So contrary to what some people think, seniors don’t spend all of their time camped out in front of the television. Some even learn to use the Internet, pick up a new hobby, like painting or knitting, travel to explore new locations, or go back to school. They know that an idle brain can lead to health issues or even death. “I always say ‘use it or lose it,'” says Michael Wasserman, MD, a geriatrician and a board member of the American Geriatrics Society’s Health in Aging Foundation. “Keeping your mind active is sort of like keeping all of its parts greased.”
A study that examined the personality traits of Ashkenazi Jewish people between 95 and 107 years old found that most of them tended to have a positive attitude and a sense of humor, suggesting those traits could play a role in living a longer life.

Norma Martin, 100, who lives in Sarasota, FL, says being optimistic has certainly helped her get through life. Just like anybody else, she’s had her share of ups and downs, but her attitude is upbeat. “I had a good life with my husband and two children. I just feel that I was blessed all my life,” she says. “I’ve always looked on the better side of life. I like doing that.”
Lynn Adler, founder of the National Centenarian Awareness Project, and coauthor of Celebrate 100: Centenarian Secrets to Success in Business and Life, says optimism is part of what she considers the centenarian spirit.

“Simply put, centenarians are not quitters,” she says. “They have a remarkable ability to renegotiate life at every turn, to accept the losses, challenges and the changes that come with aging and not let it stop them.” And they usually do it with a smile.
Another perk of that optimistic attitude may be good stress management. Chuse says he has tried to lead a stress-free life by rarely arguing, staying calm, and always being thankful. Indeed, chronic stress can lower your immunity and contribute to health problems such as heart disease, high blood pressure, obesity, and diabetes.

Reducing your stress—by writing in a journal, talking to a supportive family member or friend, exercising, engaging in relaxing activities, or seeking professional help—may help prolong your life.

Listen to your gut

Chuse credits cleaning up his diet with his longevity. At around the age of 50, he started eating healthier, opting for more fruit and a variety of vegetables like kale and other leafy greens. He may be on to something: The Okinawan centenarians traditionally eat a diet that is low in calories and high in veggies. They also stop eating when they’re 80% full, a cultural habit known as hara hachi bu, which gives the stomach time to send the “I’m full” signal to the brain.
Adler, who has been working with centenarians for 30 years says, in her experience, the centenarians of today are much healthier than those of 25 or 30 years ago. That may be due in part to the increasing research and knowledge about the importance of maintaining a healthy body weight.

Adler says the centenarians she’s been in contact with over the years were usually within the range of what’s considered an acceptable weight. The Okinawan centenarians also keep their body weights in check, with study results showing most had been lean throughout their lives, with an average body mass index (BMI) that ranged from 18 to 22. Being overweight or obese raises the risk for heart disease, stroke, hypertension, type 2 diabetes, sleep apnea, and respiratory problems, and some types of cancer, all of which can shorten lifespan.
Allen Kamrava MD, a colorectal surgeon in Beverly Hills, says there was a stark difference between two appendicitis patients he operated on on the same day. “The next morning, the 35-year-old patient was complaining tremendously about the pain, begging for more pain meds, and incensed when we suggested that he could go home that day, saying he wished to stay at least a couple of nights in the hospital,” Kamrava says. The other patient, who was 102, was the exact opposite. “He was up and dressed and walking the room not even six hours after surgery,” Kamrava says. Furthermore, he said he wanted no pain medications and just wanted to go home. “I remember him saying, ‘this place will be the death of me,’ and he basically wished to minimize his exposure to any hospital,” Kamrava recalls.

As crazy as it sounds, going easy on the doctor’s visits and medications may help you to live longer. No, you shouldn’t cancel your upcoming mammogram or immediately stop taking prescribed medications. It’s important to see a doctor for preventive care and when it’s necessary, and take medications when needed, Wasserman says. However, popping a pill anytime you have a little ache, or racing to the doctor for every sniffle, can lead to unnecessary treatments, side effects, and medication or medical errors, which could possibly reduce your lifespan (or the quality of your life, at least), he adds. To decrease the chance of health mishaps, consider the risks and benefits of any medical tests, procedures and medications (whether prescription or OTC).

Many people dream of retirement, but some others retire and don’t do so well. “There’s something unnerving about waking up, not knowing what you’re going to do, not having anything planned,” Wasserman says. That uncertainty (and boredom) can affect a person’s mental and physical wellbeing. Martin, for one, never retired. “I love what I do, so I never wanted to retire,” she says. She’s been a realtor for 30 years and is still selling homes. Not giving up her career may have had a positive impact on her lifespan.

“There’s something about the human brain that really appreciates having a schedule, having a regular routine every day,” Wasserman explains. “It’s unknown whether it’s the fact that it can help reduce stress, or that it gives people a sense of purpose,” he says, “but somehow having a daily routine seems to be beneficial.” That doesn’t mean retirement should be out of the question. You can retire and still set yourself a schedule. A daily routine could be as simple as determining what you’ll do in the morning, when you’ll do chores, exercise, or leisure activities, and how you’ll unwind at night.
Dorothy Cammon, 100, who lives at Atria Senior Living’s Vista Del Rio location in Albuquerque, NM, says while hard work and determination have helped her live so long, beauty sleep has also played an important part. “Getting adequate sleep is part of a healthy lifestyle, and it can benefit your heart and mind,” she says. However, she wasn’t able to get much sleep when she was younger. “While raising my children, I made them breakfast every morning and I had to get them ready for school, so getting enough sleep was not going to happen,” she says.

“Eventually, though, when my kids grew older, I was able to sleep more and better.” As Cammon believes, making sleep a priority can help you live a longer life. Sleeping less than 7 hours a night on a regular basis is associated with diabetes, high blood pressure, heart disease, stroke, depression, weight gain and obesity, and increased risk of death, according to the American Academy of Sleep Medicine. So if you want to live a long (and healthy) life, be sure to get your sleep on.
—Culled from msn health & fitness