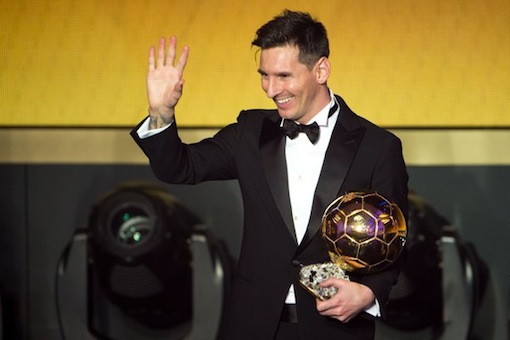 Lionel Messi has won the 2015 FIFA Ballon d’Or award, scooping the best player in the world accolade for a record fifth time.

The 28-year-old claimed the 2015 award – voted for by a panel of journalists, international coaches and captains – at the annual ceremony in Zurich on Monday evening.

“This is a very special moment for me to be back here on this stage again winning another Ballon d’Or,” Messi said upon receiving the award.

“It’s incredible that it’s my fifth and is much more than anything I could have dreamed of as a kid. I want to thank all those who voted for me first of all. I also want to thank my team-mates, as I always say none of this would ever have been possible without them.

“And lastly, I want to thank football in general for everything it has brought me, both the bad and the good, because it has made me grow and learn always.”

Messi won the best player in the world award for four consecutive years from 2009 to 2012 before being pipped to the title by Cristiano Ronaldo in 2013 and 2014.

The Argentinian had another stellar year in 2015 where he scored 53 goals in 56 appearances in all competitions for Barcelona. He also inspired Argentina to the Copa America final, where they were beaten by Chile on penalties.

The Coach of the Year award for the men’s game went to Luis Enrique who guided Barcelona to the treble in his first season in charge at Barcelona. The 45-year-old also led Barcelona to the UEFA Super Cup at the beginning of the season after a 5-4 win over Sevilla in August’s final in Tblisi.

Brazilian Wendell Lira won the FIFA Puskas Award for the best goal of 2015 for his stunning overhead kick for Goianesia against Atletico-GO.

Carli Lloyd was named FIFA Women’s World Player of the Year after captaining USA to 2015 Women’s World Cup glory, scoring a 13-minute hat-trick in the final – including one from the halfway line – to finish as the tournament’s joint top goalscorer.