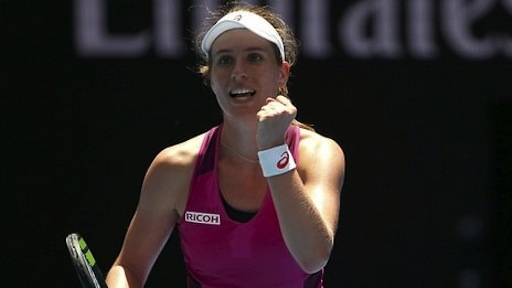 
Johanna Konta outclassed eighth seed Venus Williams 6-4 6-2 to reach the second round of the Australian Open.

Konta denied that 35-year-old Williams’ age had anything to do with the American’s laboured display.

“It’s irrelevant how old she is because she’s such a champion with so much experience and knowledge,” said Konta.

“Even if she’s playing with one leg out there, you’ve got to really take care of things on your own because she’s an incredible player. I have all the respect for her in the world.”

Konta, who reached the last 16 at the 2015 US Open, is the only British woman left in the singles draw following Heather Watson’s defeat on Monday.

Andy Murray also won to join Konta in the second round but Dan Evans and Aljaz Bedene both went out.

The Briton, who has described Williams as her idol, moved her opponent around the court and hit deep into the corners to take control of the match.

Konta broke serve twice in the first set and then eased to a 5-0 lead in the second before the American rallied briefly.

But Konta held her nerve to secure a famous victory over the former world number one.

“Right now it is still very much a blur,” added Konta, who lost in the first round at her two warm-up tournaments.

“When the draw came out and I saw who I was playing, I was just hoping to stay out there more than an hour.