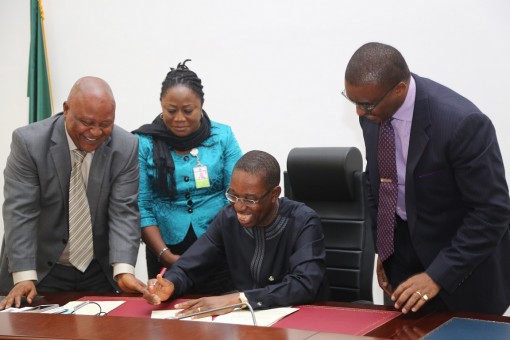 Senator Dr. Ifeanyi Okowa, Delta State Governor has signed an appropriation bill of N267 billion into law with an assurance that projected Internally Generated Revenue (IGR) would drive the implementation of the budget.

The Speaker of the Delta State House of Assembly, Rt. Hon. Monday Igbuya accompanied by the Deputy Speaker, Rt. Hon. Friday Osanebi, the Clerk of the House, Mrs Lyna Ochulor and other principal officers of the House of assembly presented the appropriation bill christened ‘Budget of Renewed Hope And Inclusive Development’ to the Governor for his assent at the Government House, Asaba Tuesday.

At the signing of the appropriation bill, Governor Okowa lauded the legislators for its speedy passage which would translate into massive infrastructure development of the state before the commencement of the rains.

“This budget that have been assented to in good time, gives us enough room to utilise the dry season in our infrastructure development plans and I must appreciate the Speaker and members of the Delta State House of Assembly for taking their time, during the festive season to truly work on the budget, ensuring that we had a very speedy passage of the budget,” he said, disclosing that “with the bill that was signed into law, we have appropriated N153 billion as recurrent expenditure and N114 billion for capital expenditure and by God’s grace, we hope to work very strongly to generate the revenue to implement the budget in full.

He added: “it is our hope that the Board of Internal Revenue (DBIR) would exceed the target of N75 billion from the N40 billion that we had last year. I believe that it is achievable because we are going to block all loopholes and ensure that more people come into the tax net.”

The Governor specifically urged Deltans to pay their tax, assuring, “we will do our best to be accountable and money collected from taxes would be ploughed back to the development of the state.”

Governor Okowa commended the good working relationship between all arms of government in the state, noting that such partnership would lead to faster delivery of his administration’s mandate of prosperity for all Deltans.

Rt. Hon. Igbuya had told the Governor and members of the state executive council who were present at the occasion, that the Assembly members, “took time off and did justice to the bill in line with your administration’s drive for good time and prosperity agenda.”