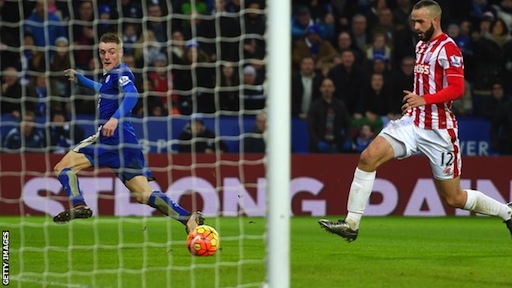 Jamie Vardy is back to scoring for Leicester

Leicester moved three points clear at the top of the Premier League with an impressive victory over Stoke.

Jamie Vardy struck straight at Jack Butland early on before Leicester’s Danny Drinkwater lashed in from the edge of the area close to half time.

Vardy rounded Butland and slotted into an open net as Leonardo Ulloa added a third from close range late on.

Stoke struggle throughout – their best chance falling to Joselu, whose header was pushed away by Kasper Schmeichel.

Leicester had won just one of their last five league games going into this fixture and there were question marks about whether they could stay in the hunt for the Premier League title.

But they answered the critics with a thumping win over Stoke – full of energy and industry, and have now conceded just one goal in their last five games.

The Foxes are patrolled at the back by a strong centre-back pairing of Wes Morgan, who made seven clearances, and partner Robert Huth.

In front of them, N’Golo Kante’s vigour epitomised the team’s performance.

Drinkwater’s effort was their first from outside the box this season, while Vardy netted his first goal in six league games, before Ulloa struck after sublime skills from Riyad Mahrez.

Liverpool and title rivals Arsenal and Manchester City, games which will define whether they are title pretenders or realists.
One eye on the cup?

Stoke’s problems lie in front of goal, having not scored in nine of their 23 league games this season. Striker Bojan was kept on the bench, perhaps with their League Cup semi-final second leg against Liverpool on Tuesday in mind.

They managed just two shots on target against the Foxes, with neither effort testing goalkeeper Kasper Schmeichel, who had an easy afternoon.

Playmaker Xherdan Shaqiri was kept quiet and things were made worse when skipper Ryan Shawcross hobbled off with an injury in the first half.

Without their leader at the back, Stoke’s hopes of finishing in a European spot were dented as they drop to ninth in the table.