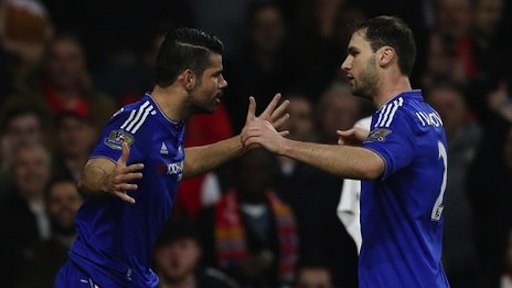 Arsenal will be kicking themselves after losing to a lacklustre Chelsea side at the Emirates Stadium thanks to a goal from maverick striker, Diego Costa.

Arsenal were down to ten men in the first half after German defender, Per Mertesacker was sent off for a foul on Costa, who he barely touched.

Victory would have put Arsenal back on top but Chelsea survived in relative comfort to leave the Gunners in third place with Leicester City now holding a three-point lead over Manchester City at the Premier League summit.

This was the day Arsenal were meant to lay the ghost of Chelsea, who went into this game unbeaten in their last eight Premier League games against the Gunners.

Even Wenger’s bogey man, Jose Mourinho, was out of the picture after his sacking. Wenger has lost five and drawn six of eleven league meetings with his old adversary.

And yet it was the same old story for Arsenal as the frustration of their players and fans inside the Emirates reached boiling point long before the final whistle.

There was no shortage of spirit and endeavour from Arsenal in the face of the numerical disadvantage inflicted on them after Mertesacker’s early red card.

If anything, it was inspiration and a little self-belief Arsenal lacked against a side that looked physically stronger in a game where Wenger’s side was missing a warrior who could get in and among the visitors in those exchanges.

Their best effort of the match fell to Mathieu Flamini who attempted to convert Aaron Ramsey’s through-ball with a kung-fu kick, where a header might have been more appropriate.

The result is hardly a terminal blow to Arsenal’s ambitions but a wound inflicted in familiar fashion. It now remains to be seen how much of an after-effect there is.

Diego Costa suffered the abuse of Chelsea’s fans in the aftermath of Jose Mourinho’s sacking as they regarded his poor form and attitude as a key factor in the sacking of “The Special One”.

The relationship is repaired now, with Costa regaining that mixture of marksmanship and menace that made him so significant in last season’s Premier League title win.

Costa’s near-post finish from Ivanovic’s delivery was his sixth in eight games since Mourinho left – and it was not just that quality that helped Chelsea look much more like their old selves.

He got under the skin of Arsenal’s players and fans, although he could hardly be blamed for his involvement in Mertesacker’s red card when he was unceremoniously bundled over as he tried to race clear.

Costa departed to the resounding jeers of Arsenal’s fans and cheers of Chelsea’s supporters when he was replaced by Loic Remy after 68 minutes – job done and proof Hiddink’s side are so much more effective when the Premier League’s pantomime villain is on song.

Having talked about the lack of warriors in Arsenal’s line-up, one look at Alexis Sanchez back in action shows how he can fit the bill.

The huge roar that swirled around the Emirates when he emerged after 57 minutes to replace Joel Campbell was not simply out of a growing desperation as Arsenal struggled against Chelsea – it was a signal that so much of the rest of the Gunners’ season rests on the shoulders of the world-class Chilean.

It was his first appearance since sustaining a hamstring injury at Norwich City on 29 November and it was understandable he looked a little rusty, but the strength, perseverance and sheer force of will to influence a game were still in evidence in this cameo.

This was a major setback for Arsenal’s title hopes – but the return of Sanchez confirms all is not lost if they keep him fit.