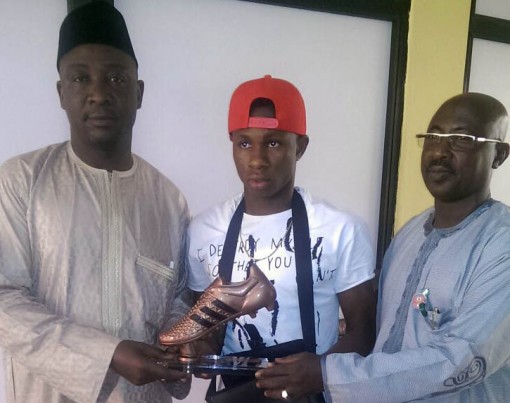 The Nigeria Football Federation, NFF, Monday presented Golden Eaglets’ forward, Samuel Chukwueze, with his bronze boot from the FIFA U-17 World Cup, which was held in Chile last year.

Football’s world governing body, FIFA, admitted in November that it made a mistake in naming Eaglets’ skipper Kelechi Nwakali as the winner of the bronze boot, and decided to send another one to the actual winner, Chukwueze, while telling Nwakali to keep his.

FIFA had explained that although Nwakali and Chukwueze finished the tournament with the same number of goals (three) and assists to be joint third best scorers, Chukwueze played less number of minutes in the tournament and therefore, was the winner.

Also on Monday, the NFF commiserated with the National Sports Commission, NSC, over the death, last Friday, of a deputy director in NSC’s Federations and Elite Athletes Department, Mr. Olu Akoja.

Akoja died at the National Hospital, Abuja on Friday from complications that followed a medical operation.

They were received by the Director of Federations and Elite Athletes Department, Mrs Hauwa Kulu-Akinyemi.

Sanusi said: “We have come to express our sorrow over the death of Mr. Akoja. He was known to be very hardworking and a gentleman to the core. Allah knows best. We pray that God will be the father, Provider and Protector of those he has left behind, and also that He will grant the family and the National Sports Commission the fortitude to bear the big loss.”

Kulu-Akinyemi, who confessed that she is still finding it difficult to come to terms with the fact that Akoja was gone, thanked the NFF delegation for the condolence visit.

“Akoja’s death is most shocking. We still find it difficult to believe. The Almighty God has an answer for everything, so we would have to accept it that way. He was a very energetic and efficient person who loved to take on even greater responsibilities. The NSC and Nigeria sports will sorely miss him,” said Kulu-Akinyemi.