I did not watch shootout - Klopp 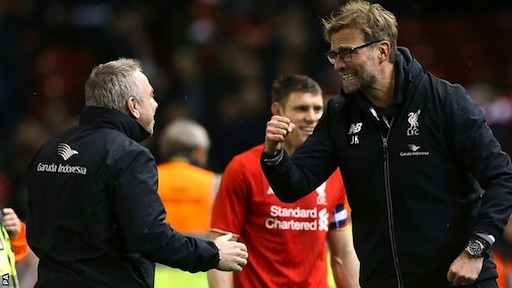 Liverpool manager Jurgen Klopp said he did not see any of the penalty shootout against Stoke City that took his side to Wembley in the Capital One Cup final – but has set his sights on lifting his first trophy since arriving at Anfield.

Liverpool triumphed 6-5 on penalties after Stoke won 1-0 after extra time to claw back a semi-final first-leg deficit. Reds goalkeeper Simon Mignolet made decisive saves from Peter Crouch and Marc Muniesa in the spot-kicks.

Klopp said: “I didn’t see one shot. I was behind the wall of my players so I had to watch it from there. I will watch it on television at home but it was good watching the crowd instead.”

Liverpool will face Manchester City or Merseyside neighbours Everton in the final on 28 February, and Klopp said: “Hopefully we will win and have a really good night in London.

“It is very important. I saw that in the faces of my players, but in this moment we shouldn’t talk too much because being in the final is good but the important thing is to win. Their goal was double offside but we got some luck in the penalties.

“We have the possibility to win the final. Now we will watch the game between Everton and Manchester City on Wednesday. It will be a north of England final. Wembley is a cool place to play football but we go there to win – it’s not much fun to lose.”

Klopp says he will relish meeting Everton but has no preference, adding: “It is great to be here in Liverpool. It is a great place to be. It is great the Blues and Reds are together in normal life but want to beat each other in sport, which is normal.”

He singled out 23-year-old Liverpool defender Jon Flanagan for praise after the right-back was outstanding in his first start since the final day of the 2013-14 season.

Mignolet has been consistently backed by Klopp despite criticism and repaid him with the crucial penalty saves.

“Mignolet did well. It was really difficult,” said Klopp. “There were 500 long balls into the box and we are all sitting in our warm chairs saying ‘come and do something.’ Peter Crouch was only on the pitch to disturb and as a team our reaction was really good.”