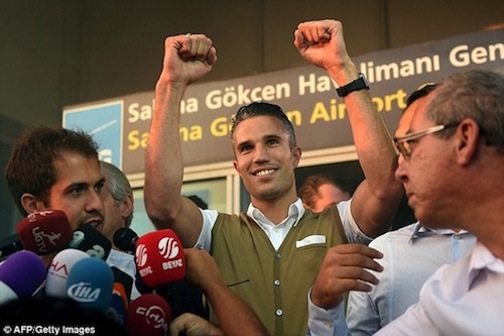 Chelsea are weighing up a move for Fenerbahce and former Manchester United striker Robin van Persie, 32, to solve their goalscoring problems. (Daily Express)

The Blues could face a transfer embargo after midfielder Bertrand Traore played for their under-18 side when aged 16, in an apparent breach of Fifa regulations. (London Evening Standard)

Leicester City have increased their offer for Sampdoria striker Eder, 29, from £7.95m to £10m, but could face competition from Inter Milan. (Daily Mail)

Manchester United are worried assistant manager Ryan Giggs will end his 28-year association with the club if he is overlooked as boss Louis van Gaal’s successor. (Daily Mirror)

Van Gaal will not step aside for his friend Jose Mourinho or anyone else, says his Dutch biographer Maarten Meijer. (Manchester Evening News)

Everton goalkeeper Tim Howard, 36, is in “serious talks” with Colorado Rapids and is “highly likely” to end his 10-year stay with the Goodison Park club and move to Major League Soccer in May. (NBC Sports)

Sunderland are to increase their bid for Swansea striker Andre Ayew, 26, to £10m, plus Italy striker Fabio Borini, 24. (Talksport)

Liverpool have been given encouragement in their pursuit of midfielder Alex Teixeira, 26, following the comments of the Shakhtar Donetsk coach. (Daily Express)

Arsenal have had a bid rejected for Napoli’s 24-year-old midfielder Jorginho, but might return with a further offer in the summer.(TuttoMercatoWeb – in Italian)

Middlesbrough have offered £9m for Blackburn striker Jordan Rhodes, 25, with a further £2m based on appearances. (Sun – subscription required)

Newcastle have been told by Chelsea that it will cost £12m to sign striker Loic Remy, 29. (Daily Mail).

The Blues are set to sign Corinthians midfielder Alexandre Pato, 26, on a six-month loan deal with the option of making the move permanent in the summer. The Brazilian club had initially wanted to sell him outright for an £8m fee.(London Evening Standard)