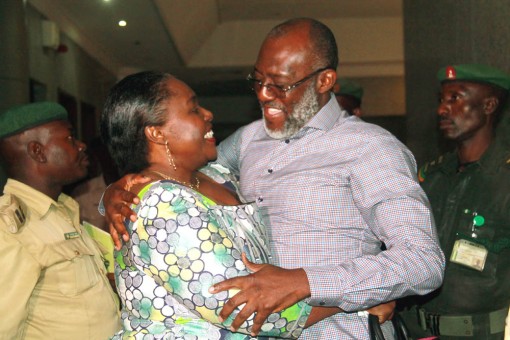 Spokesperson of the Peoples Democratic Party (PDP) Olisa Metuh has regained freedom from Kuje prison after meeting the bail conditions granted him by Justice Okon Abang of a Federal High Court sitting in Abuja, Nigeria’s capital.

Metuh was able to meet his bail conditions following the variation of his bail given him on Wednesday.

Following Metuh’s application for variation of his bail conditions granted him by the court on January 19, 2016 as he was unable to meet with the aspect that said that the landed property of the two sureties that will stand for him must be located in Maitama District, Abuja only, the court on Wednesday said Metuh’s proposed sureties could now be owners of property with valid title documents, “in any district of the Federal Capital Territory”.

It would be recalled that ‎Metuh was on January 15, 2016 docked on charges of money laundering and fraudulent receipt of N400 million, part of the funds allegedly meant for procurement of arms, from the Office of the National Security Adviser in November 2014.

Metuh is believed to have returned to his residence at the Prince and Princess Estate in Abuja as at the time of filing this report.