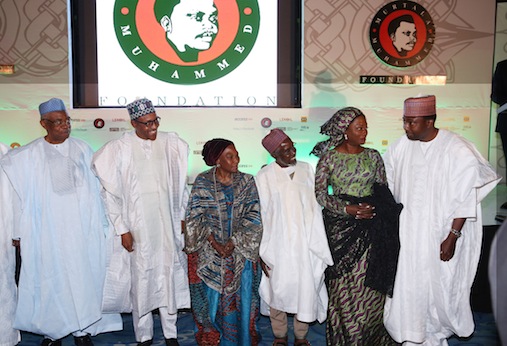 President Muhammadu Buhari on Saturday urged Nigerians to honour former Head of State, late Murtala Muhammed instead of mourning him, adding that, they should always demonstrate the virtues of loyalty, honesty and determination to make Nigeria better as demonstrated by the late military leader.

“We are here to honour a national hero and patriot, not to mourn him, and to take a few lessons from his achievements,” he said while speaking at the Murtala Muhammed 40th Memorial Lecture in Abuja.

“His love for Nigeria and Nigerians, from wherever they came; His intense professionalism; His impatience with incompetence and lack of patriotism; His loyalty to friends and colleagues.

“His life, short though it proved to be, was marked by an extraordinary passion, energy and determination to do better, and to make Nigeria better.

He said Nigerians, irrespective of their age brackets, should always exhibit the good virtues of Murtala Muhammed rather than mourn his death.

Buhari noted that the country mourned the death of Murtala because he was on his way to putting Nigeria back to the path of order and discipline, after years of drift, corruption and near despair.

He said Murtala’s motto was to get the job done as quickly as possible, saying that no one could doubt his inspirational qualities or call into question his love and dedication in the service of Nigeria.

“These are values that young and old alike should all remember and celebrate.

“On assuming the role of Head of State in 1975, Murtala set out with a single-minded determination seldom seen in Nigerian leadership. Decisions were on fast-track,” the president said.

He also stated that many major developments were prominent among Murtala Muhammed’s legacies, and these included the move of the capital to Abuja from Lagos and the creation of seven new States.

The president, who noted that late Murtala was his senior in Army, said he developed a great liking and respect for him on account of his professional excellence, competence, straightforwardness and genuine interest and concern for up-and-coming officers like him.

According to him, of course, no one is without flaws. He was a man in a hurry, and sometimes this could make him appear abrupt or even moody.

“But what he could not tolerate was incompetence and idleness.

“By the time Murtala was given Command during the Civil War, the Federal side was on the defensive.

“The rebels had over-ran the then Mid-West, and reached as far as Ore, just 100 miles from Lagos.

“By dint of sheer bravery, improvisation and resourcefulness, he mustered a rag-tag group of soldiers, integrated them into an entirely new division, knocked them into fighting shape, recovered Mid-West and ventured across the Niger.

“Alas, there were terrible casualties on both sides, but sacrifice and loss were part of the risks of war,” Buhari said.

Retired Lt.-Gen. Theophilus Danjuma, Who is the Vice-President of the Board of Trustees of the Murtala Muhammed Foundation, organisers of the annual lecture series, expressed great joy for being associated with the late Murtala early in life.

He commended the efforts of the foundation and advised its leadership to embark on aggressive media campaign with a view to educating members of the public on its activities and achievements so far.

He extolled the virtues of the former Nigerian Head of State, describing him as a natural leader.

The guest speaker, David Richards, former Chief of Defence Staff of the British Armed Forces, noted that inter-state and intra-states rivalries had continued to make the world unstable for mankind.

Richards, who spoke on the topic, “Regional Security and State Building: Portents and prospects,’’ challenged leaders to find lasting solutions to socio-political crises across the world.

The Chief Executive officer of the Murtala Muhammed Foundation, Mrs Aisha Muhammed-Oyebode, saluted President Muhammadu Buhari for embarking on the crusade against corruption in the country.

Muhammed-Oyebode also commended the efforts of the Buhari-led administration towards the fight against Boko Haram insurgency in the North Eastern states of the federation.

She expressed the hope that the abducted Chibok schoolgirls would soon be rescued in view of the successes being recorded by the Nigerian Army and other security agencies in the country.

Murtala Muhammed was assassinated in a military coup on February 13, 1976.