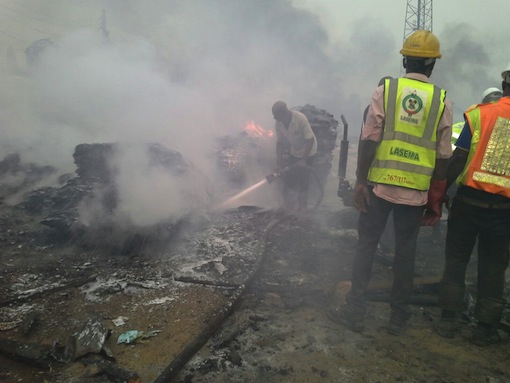 A serious fire outbreak at Kuramo Beach area of Lekki, Lagos, Southwest Nigeria has burnt two persons to death and razed over 100 houses, with thousands of residents displaced.

Director, Lagos State Fire Service, Rasak Fadipe reports that the early morning fire started after an explosion occurred following a woman cooking in the kitchen closed to where a fuel-laden keg was kept.

According to him, “tragedy fire destroyed over 100 shanty structures at small Kuramo, Lekki. Male and female adults were roasted in the fire.”

He said the shanties were built on three acres of land while the fire consumed houses in about four plots as the fire service succeeded in preventing it from spreading to other areas.

Fadipe said it was carelessness that resulted in the fire as the woman stored fuel in the house and cooked near it, causing the fire to occur.

He said the fire service responded promptly and were able to prevent the fire from spreading, but lamented that over 100 houses had already been burnt before the fire was quelled, adding that two fire trucks with 10,000 litres of water each from Lekki Fire Station responded to the fire tragedy.

The fire service boss appealed to Lagosians to desist from storing fuel in their houses in order to avert disasters like the Lekki tragedy.

He also appealed to Lagosians to try and memorise the emergency numbers, such as 767 and 112 so that they could easily call the fire service when there is any emergency, as this is for their own good.

On the Apapa fire which engulfed the Nigeria Biscuit Company, Fadipe said the fire razed the entire warehouse, saying that a part of the two storey building collapsed as two fire service men narrowly escaped death, adding that his men were still fighting the fire.