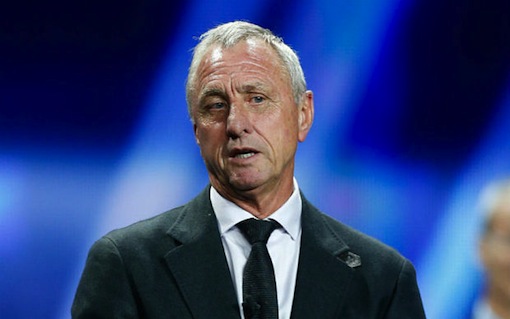 Cruyff, who made his name as a forward with Ajax and Barcelona, was European footballer of the year three times.

He won three consecutive European Cups with Ajax, coached Barcelona to their first European Cup triumph in 1992 and helped the Dutch reach the 1974 World Cup final, where they were beaten 2-1 by West Germany.

The Dutch FA said: “Words can hardly to be found for this huge loss.”

It added: “The greatest Dutch footballer of all time and one of the world’s best ever. Our condolences go to his wife, family, friends and the entire football world at home and abroad. We wish everyone a lot of strength in this difficult time.”

It was at the 1974 World Cup where he first showcased the ‘Cruyff turn’ in a match against Sweden.

Cruyff, who had double heart bypass surgery in 1991, was diagnosed with cancer in October 2015.

Having been a smoker, he gave up immediately after the operation and took to sucking lollipops in the dugout.

He featured in a Catalan health department advert, saying: “Football has given me everything in life, tobacco almost took it all away.”

In February, Cruyff said he felt he was “2-0 up in a match” against lung cancer and he was “sure I will end up winning”.

He was sacked by Barcelona in 1995 but remained influential at the club for the rest of his life.

Manchester City and Belgium captain Vincent Kompany: “RIP Johan Cruyff, true football royalty. I don’t think anyone has ever influenced the game as much as he has done. We have all been touched and inspired by his vision and his beliefs. Football will miss him but we will never forget.”