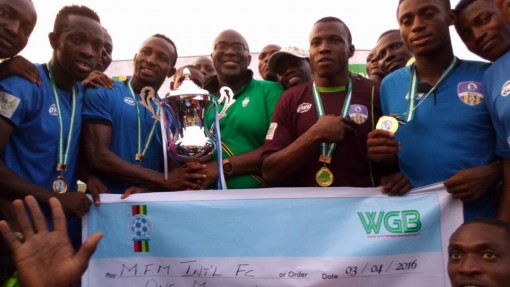 Lagos-based MFM say they are ready to host Rangers International FC of Enugu in their battle for supremacy in a mid-week match of the Nigerian Premier Football League (NPFL).

NAN reports that debutants, MFM, in hosting Ranger in the match which could be a decider on who occupies the first position of the NPFL log will strive to win.

NAN reports that high-flying MFM opened their campaign in the premier league with a convincing 2-1 win over Nasarawa United in Lafia.

Since then, MFM has continued to be impressive in their campaign in the NPFL with 15 points from nine matches, including four wins, three draws and two loses.

MFM has yet to lose a match on their home ground, recording the only draw with Kano Pillars in the Match Day 8 game played under floodlight.

The club, now basking in the euphoria of winning the Lagos State Federation Cup, says it is a motivation to challenge Rangers and reclaim the first position on Wednesday by 4:00 p.m.

On the other hand, Rangers had also on Saturday become the champions of Enugu State Federation Cup after defeating Disdevt Afrik 5-1 in the final.

It occupies the first position on the NPFL log after nine matches with 17 points, two points ahead of MFM; with five wins, two draws and two loses.

MFM FC Media Officer Olawale Quadri on Tuesday said that his team was battle-ready for the NPFL table toppers clash with Rangers.

Quadri, told NAN on telephone in Lagos that his team was well prepared and expects nothing but a win in the all-important Match Day 10 home fixture.

“We expect victory, we cannot afford a draw against Rangers on Wednesday, we are going for a win; the coach has challenged the boys to keep the winning momentum.

“We have drawn two straight matches now. We drew with Kano Pillars which was our home game and also drew away to Plateau United in Jos.

“This match will be given topmost attention as a must min match. We cannot afford to play draw again.

“We recognise the status of Rangers owing to their run in both home and away wins, but we are not swayed by that, all we want is a win,” he said.

Quadri added that both the coaching crew and the players knew the importance of winning their game which could be the determinant for their continental ticket.

“The players themselves recognise that we need to start winning; so we want to win this match and go back to the top of the table to assure us a continental ticket.

“Our main midfielder Onuwa is fully fit. Against Kano Pillars, he was injured but after a while he aggravated the injury.

“He is now fully fit; the goal he scored in the Federation Cup final is a proof of his fitness,’’ he said.

On his part, Foster Chime, Rangers’ Media Officer, said the mood in the camp of the club was for a win against MFM.

“I want a win so that we will make a statement on the NPFL this season, we are preparing well and I hope this will spur us to win.

“We can win the league because we are familiar with the terrain,” he said.