Kanu Agabi back in Saraki's corner as CCT trial continues 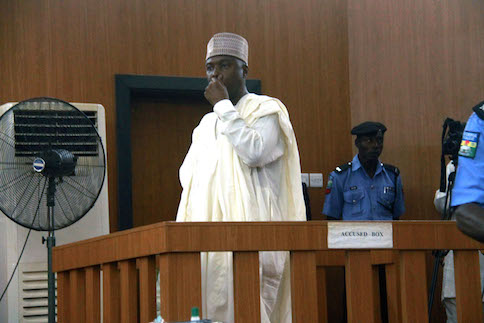 The trial of Senate President Bukola Saraki on a 13-count charge of false assets declaration has commenced with the arrival of Mr. Danladi Umar, the Chairman of Code of Conduct Tribunal and his partner at the courtroom at 10.54 am.

The Senate President is already in the dock where he spent over three hours yesterday. And we expect the first prosecution witness to take the witness stand to continue his testimony shortly.

Chief Kanu Agabi, his lead lawyer straightaway announced to the court that he is leading a team of 90 lawyers.

“We are altogether 90. Let me tell you when the history of this country is written, you will be one of the judges before whom one of the highest number of lawyers appeared,” Agabi told Umar, triggering a burst of laughter in the court audience.

Saraki came into the courtroom with his Senator friends around 10.05 a.m. His arrival was greeted with the shouts of “Oloye,” by his supporters.

The Senate President went to greet his defence team, but avoided eye contact with Rotimi Jacobs, the lead counsel for prosecution who was sitting beside Agabi.

The trial is turning out to be one of the most sensational corruption trial in Nigeria in recent times.

Associates of Senate President Bukola Saraki, the accused, took up most of the seats at the Code of Conduct Tribunal.

Paul Usoro, the Senior Advocate of Nigeria who led the defence of Saraki yesterday was also in court.

His efforts to get an adjournment of the hearing of the case failed yesterday as Justice Danladi Umar, the Chairman of Code of Conduct Tribunal insisted that the trial must begin.

Thus, Usoro watched and the Senators who had accompanied the Senate President to the Tribunal watched agonisingly for over two hours as the first prosecution witness, Michael Wetkas narrated how the Senate President laundered billions of naira from the account of Kwara State when he was governor between 2003 and 2007.

Wetkas told the tribunal that Saraki’s personal assistant, Abdul Adama, paid between six hundred and nine hundred thousand naira fifty times in a single day into the account of his principal.

He also revealed there were several companies which were linked to the defendant and that the former governor of Kwara state was also alleged to have maintained three accounts at Guarantee Trust Bank.

The witness also told the Tribunal that between 2005 and 2013, the account had an in-flow of about N4bn and that a major source of inflow into the accounts was a N2.5billion loan taken from GTB within the period.

The funds in the account, according to Wetkas was used to defray the loans the Senate President had obtained to purchase houses in Lagos, Abuja and ourside the country.

The houses, he said were not declared in the six assets declaration forms filled by the Senate President in the two terms he spent as governor.