Vardy strikes twice to edge Leicester closer to the title 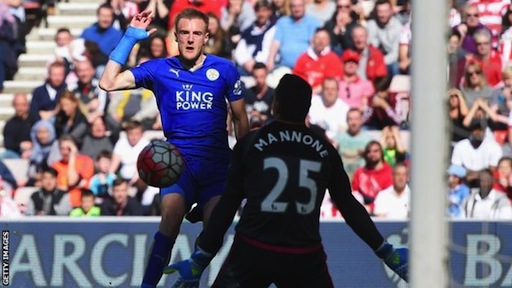 Like Leicester, Jamie Vardy has also been a revealtion this season

Vardy coolly slotted in the first, before outpacing the opposition defence and tucking home a second late on.

The hosts’ best chance fell to substitute Jack Rodwell, who somehow blazed over from just eight yards out.

Three wins from their last five games will guarantee Leicester their first ever top-flight title, while Sunderland remain four points from safety.

Solid in defence, clinical in attack

Leicester’s remarkable surge towards the title shows no signs of slowing up after a battling victory over relegation-threatened Sunderland.

Foxes goalkeeper Kasper Schmeichel said there is “no pressure” on his side in the run-in and there were certainly no signs of nerves at the Stadium of Light, even after going ahead in the 66th minute.

England internationals Danny Drinkwater and Vardy combined for the striker’s 20th league goal of the season, the first Leicester striker to reach the milestone in the top flight since Gary Lineker in the 1984-85 season. His 21st in injury time was superb, leaving Patrick van Aanholt floundering before going round Vito Mannone to slip the ball into an open net.

Claudio Ranieri’s men have now won their past five league games with conceding, picking up their 14th clean sheet of the campaign. They have lost just three of their 33 league games so far.

The supporters stayed inside the ground well after the final whistle chanting “we’re gonna win the league” and it now seems only an astonishing collapse will stop them from lifting the trophy.

Sam Allardyce’s Sunderland side gave a good account of themselves against the leaders, but that is not enough at this stage of the season as they cling on to their Premier League status.

They left the Stadium of Light without any points and are 18th in the table, though they do have a game in hand on Norwich, who are four points and one place above them.

Centre-back Younes Kaboul, who should have done better with a header in the first half, made 25 clearances in the match – the most by a player in the division this season.

However, their problems lie at the other end of the pitch, having scored just four goals in their past six games.

The result could have been different if Rodwell buried his gilt-edged chance, while top scorer Jermain Defoe, with 12 league goals, was on the periphery for much of the game.