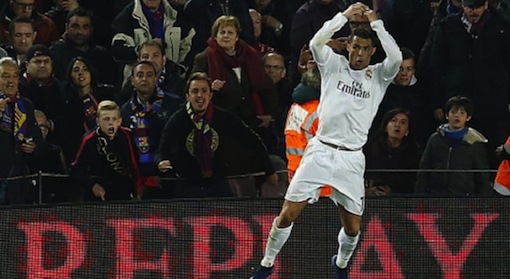 Wolfsburg arrived in Spain’s capital protecting a healthy lead, but that was wiped out by a Ronaldo double in the space of 86 first-half seconds.

The Portuguese swept home the first from six yards before a glancing header levelled the scores on aggregate.

It completed a quite remarkable turnaround by the 10-time champions of Europe and keeps alive a season that looked to be over for Zinedine Zidane’s side after last week’s loss in Germany.

Three months ago Real fans were waving white handkerchiefs in a show of anger during the final throes of Rafael Benitez’s short-lived reign.

On Tuesday, supporters gave the players a standing ovation after a dominant performance saw them advance to the semi-finals for the sixth successive season.

Ronaldo grabbed the match ball at the final whistle and placed it under his shirt as he lapped up the applause from the stands after his fifth Champions League treble – and third of this season.

The former Manchester United forward has 93 Champions League goals to his name in 125 appearances – 10 more than nearest rival Lionel Messi.

Yet, despite his hat-trick, this was a team effort from Zidane’s side.

Real join Manchester City in Friday’s draw (11:30 BST), with the winners of Atletico Madrid’s tie with Barcelona and the game between Benfica and Bayern Munich to decide the remaining two places.

Real have come alive in recent weeks under Zidane, with a deserved El Clasico win over arch rivals Barcelona one of the highlights of their late season flourish.

Yet, as good as Real Madrid were, Wolfsburg were poor defensively after sitting back and inviting pressure.

Ronaldo was unmarked when he tapped home his first, while his third goal from a set-piece came after the German wall disintegrated.

While Barca will remain favourites to defend the trophy they won last June, Real are hitting form at the right time and cannot be ignored.