Chelsea to sign Kante for £20m, treble his wages 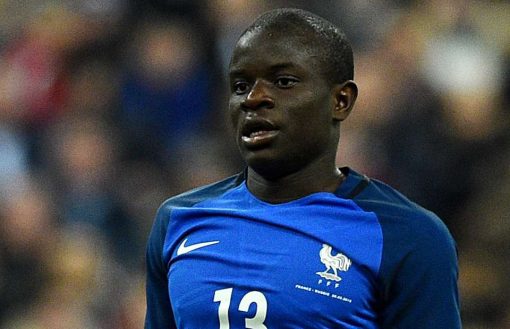 Chelsea are set to offer N’Golo Kante a five-year deal to reject Paris Saint-Germain and join them.

The Blues are ready to hand the sought-after France international more than TREBLE his £35,000-a-week wages at Leicester to tempt him to Stamford Bridge.

Incoming Chelsea boss Antonio Conte is looking to pair Kante – who has a £20million release clause in his contract – with Roma enforcer Radja Nainggolan in a new-look midfield next season.

The Blues are confident that they are in pole position to sign Leicester’s title-winner, while Nainggolan has already confirmed talks over his transfer to London are ongoing.

Mirror Sport understands Leicester have already admitted defeat in their fight to keep Kante and have bid £12m for 23-year-old Nice midfielder Nampalys Mendy as his replacement .

Should the Blues succeed with their plans it would plunge the future of Cesc Fabregas , a key player in their title win 13 months ago, into doubt.

Fabregas would become a squad player, two years after his £27m arrival from Barcelona.

The Spain international initially made a stunning impact at Stamford Bridge. His assists helped Chelsea to the top of the league where they remained all season.

But he struggled for form during the second half of the 2014-15 campaign and fared little better over the past ten months.

Mirror Sport understands the Blues could have signed Kante last summer before he joined Leicester for just £5.6m from French club Caen, and regret not doing so.

They are now desperate to rectify that mistake this time around and are in pole position for his signature.

Kante has been facing a dilemma as he would prefer to be playing his domestic football in the Premier League.

French title-holders PSG, with whom he would play Champions League football, also have a five-year deal on the table for him. But Leicester have given up hope of keeping him with their title-winning first team slowly being dismantled.

The Foxes have been told by Nice they will have to bid closer to £15m if they want to replace him with Mendy — a player Claudio Ranieri tried to sign last summer before he opted for Kante.

Nainggolan confirmed at the weekend that Chelsea were trying to sign him. Roma, however, want around £31m – a valuation that Chelsea have baulked at.

He said: “There has been contact between Roma and Chelsea. But I will not get involved so long as there is no agreement between the clubs.

“Chelsea are keen to strengthen their squad and Conte is a manager who wanted to sign me before. But the transfer is not a done deal and it would not be easy to leave Italy after 11 years.”