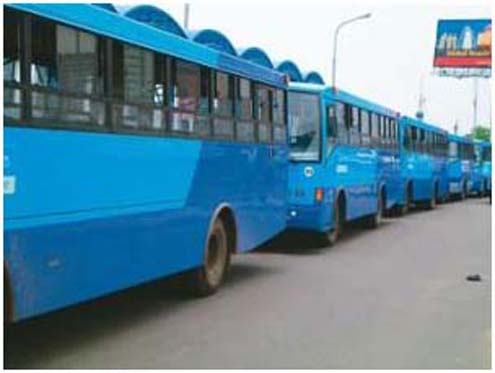 No fewer than 14 buses belonging to Primero Transport Service Ltd were on Wednesday vandalised by suspected hoodlums along the Ikorodu Road in Lagos.

Trouble started after a street hawker, who was evading arrest by Kick Against Indiscipline (KAI) officials was knocked down by an articulated vehicle at Maryland Bus Stop.

No sooner than the incident occurred, the suspected hoodlums pounced on the mass transit vehicles to vent their anger over the death of the street hawker.

Mr Adedeji Adeosun, a driver with the company, whose vehicle was vandalised said: “I was in traffic for about 20 minutes at Maryland.

“Then I saw some people running from Maryland and I opened the door to see what was happening.

“I heard shouts from people that we should come down, so, I immediately removed my uniform.

“I saw about 100 of the hoodlums otherwise called `area boys’ coming with stones and so I ran away.

“All the passengers on board my bus also came down and ran for dear life. I was hit by a big stone’’.

Another driver, Mr Michael Onabolu, said: “I saw people running and shouting that I should come down from the bus.

“And all of a sudden, I saw some guys surrounding the buses and asking my passengers and I to come down.

“Before I knew it, one of them hit the bus with a big stone and I could not move because of the traffic. I was wounded on my hands and my tights with stones”.

He said that a passenger sitting beside him was also hit by a stone, adding that all the passengers were moved to other buses to reach their destinations.

A commuter, Mr Elijah Omotayo, who was attacked in the process, said that the mob told the driver to open the door which the passengers asked him not to do.

Omotayo, a student, said, “they started throwing the stones and one of the stones hit my head”.

“We don’t know what happened, whatever it is; it is something that has to do with the government or the police.

“But does that give aggrieved people the right to destroy private property.

“People are saying that there are no jobs in Nigeria; we have created over 2,000 jobs in the last six months. Is this the reward we will get for it?

“We need to start asking ourselves serious questions in this country,’’ he told NAN.

“I don’t even know where to begin because there is no justification for destroying private property; our service is for the masses.

“Do you know how many people will be stranded today if we don’t go out to pick them up?

“How are they going to get home? We do this for the masses. Is this the reward that we will get? This is madness.’’

Meanwhile, the police with the help of the bus drivers have arrested three suspects and taken them to the company’s head office at Majidun in Ikorodu town.

As at the time of filing this report, the company has withdrawn its buses from the roads but the Managing Director, Mr Elijah Omotayo, said that they would restore service when normalcy returns.