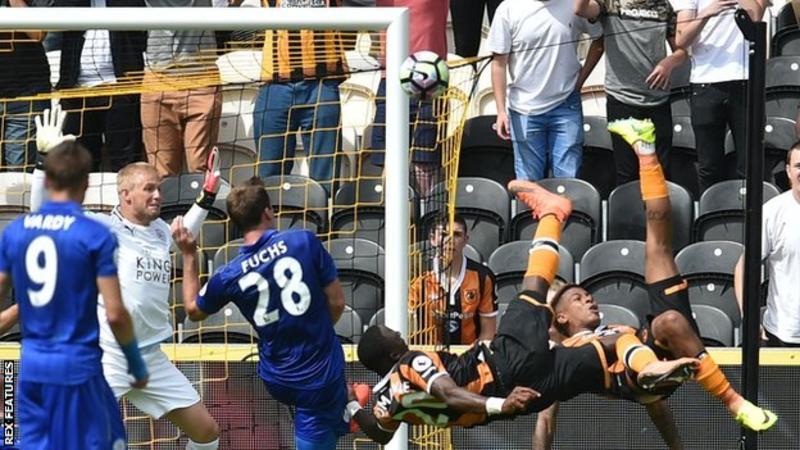 Leicester’s defence of their Premier League title began with a shock defeat at newly promoted Hull, who are managerless and relegation favourites.

Riyad Mahrez replied from the penalty spot at the start of the second half after Demarai Gray had been fouled.

But Robert Snodgrass earned the Tigers victory after a cross was not cleared.

Danny Simpson’s clearance from Ahmed Elmohamady’s ball into the area only found Snodgrass on the edge of the box, and he drilled home.

It is the first time the reigning English champions have started the season with a defeat since 1989, when Arsenal lost at Manchester United.

The Foxes’ title success was built on a solid defence and impressive finishing, but they managed neither at the KCom Stadium.

With Robert Huth suspended, summer signing Luis Hernandez came into the Leicester back four, which looked vulnerable whenever Hull attacked down the flanks.

The defending champions also struggled up front, with Jamie Vardy missing their best chances – and they needed the help of referee Mike Dean for their equaliser.

Tom Huddlestone appeared to stand on Ahmed Musa’s heels outside the Hull area, but Leicester’s £18m record signing fell into the box and Dean pointed to the spot.

But otherwise Leicester created little against a makeshift Hull defence that featured midfielder Livermore at centre-half alongside Curtis Davies.