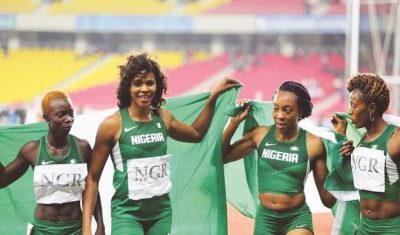 The Nigerian quartet made up of Okagbare, Gloria Asumu, Jennifer Madu and Agnes Osazuwa, finished last in 43.21seconds.

The event saw the U.S. team led by Allyson Felix, claim Gold in time of 41.01 seconds.

Jamaica and Great Britain ladies won silver and bronze after crossing the finish line in 41.36 seconds and 41.77 seconds respectively.

Germany, Trinidad and Tobago, Ukraine and Canada, all finished ahead of the Nigerian ladies.

The U.S. gold came after it appeared dead when they failed the second baton pass in Thursday qualifier.

The team however, got a reprieve after judges upheld their protest that a Brazilian runner bumped Allyson Felix as she was preparing to make a hand-off to English Gardner.

The U.S. then took full advantage of their second chance, easily beating their target of 42.7 seconds in a bizarre solo rerun to qualify for the final.

It was also a superb outing for Jamaican Usain Bolt as he claimed his ninth Olympics gold in grand style following a successful outing of the Jamaica 4x100m relay team.

The 29-year-old Bolt, who claimed to have ended his Olympic career with his ninth gold, had won the 100m and 200m in Rio and is the only man to win all three sprint events at three Olympic Games.

He combined with Asafa Powell, Yohan Blake and Nickel Ashmeade to finish in 37.27 seconds.

Japan won silver and the USA were disqualified to hand Canada bronze and lift Britain up to fifth.

Bolt hinted in February that he would retire after the 2017 World Championships in London and will not compete at Tokyo 2020, when he would be about 34 years.