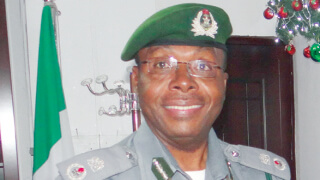 General Eporwei Edike, Assistant Comptroller of Customs in charge of Zone A.

The Zone ‘A’ Coordinator of the Nigeria Customs Service (NCS), Assistant Comptroller-General Eporwei Edike, has said that cargoes should be leave Lekki deep seaport under 24 hours.

Edike stated this during an inspection tour of the Lagos Free Zone housing the sea port project and the Lekki Free Trade Zone on Wednesday.

The Customs boss said that his visit to the zones had to do with seeking avenues of increasing customs revenue at the free zones.

Edike said that the service wanted to know how investors in the zones processed Customs duties.

He said that the service would prepare its officers ready to meet the challenges that would come with the Lekki deep seaport.

He also said that a lot of Customs investments like high profile scanners to scan about 1,000 containers daily would be put in place.

Edike said, “Once containers arrive, they are pre-scanned, the images are captured and immediately the cargoes would be processed and released.”

The Customs boss said that only containers that have queries would be referred for physical examination to disallow harmful imports.

“With that, we should not be spending so many hours on container examination.

“We expect containers to be cleared here within few hours so that when the port comes on stream, we (Customs) will already fit in”, Edike said.

According to him, this is for us a revenue issue and I am here to see whether there is an assistance Customs can give, if the operators have challenges.

He said that the service would not want any loopholes that could create room for revenue leakages.

Edike, however, said that there must be a Customs Processing Centre (CPC) at the Lagos Free Zone to capture the consignments before they are released as well as a Customs Enforcement station.

He also suggested that there should be dedicated points for exports and also spaces for examining goods in the zone so that some people would not play smart.

Edike said that the service must approve the free zone plan, adding that there should be no gap to encourage revenue leakages.

“We want to encourage water-tight revenue collection,” he said.

Sainani said that the issue of the CPC had been on the companies table based on availability of bandwidth, connectivity and further discussion with the Customs service, without delay.

He said that the sum of 1.6 billion dollars had so far been invested in the zone by private investors, adding that “this shows we are serious investors”.

Sainani said that the seaport would be of 14 metres draught and efficient to handle 8,000 containers-laden vessels.

He said that, “For the Turn-Around-Time, we are benchmarking what is happening in Singapore and other developed ports in the world.”

He, however mentioned that there were delays in taking the port off the ground due to bureaucracies on the part of government, the lenders, the strategic partners.

Sainani said that the Lagos free zone covered 850 hectares, while 90 hectares of this had been dedicated for the development of the seaport, which would take 10 years.

Edike also visited the Lekki free zone, where he was received by the Deputy Managing Director, Mr Olurotimi Ibrahim.

Ibrahim said that the free zone was an arrangement between China and the Lagos State Government based on 60: 40 shareholdings.

He said that there were so many Chinese investors in the zone, adding that there is also a truck assembly plant- Sino Truck.

The Customs boss was also at Raffles Oil Company.

Mrs Pwash Eldon, an Assistant General Manager, (Zones Technical Services) Nigeria Export Processing Zone Authority (NEPZA), said that activities of other government agencies and companies in the free zones were being coordinated by the authority.

Eldon said that NEPZA had been working within the ambit of the law.

She said that government agencies operating at the zones understood themselves so well, adding that there was no conflict.