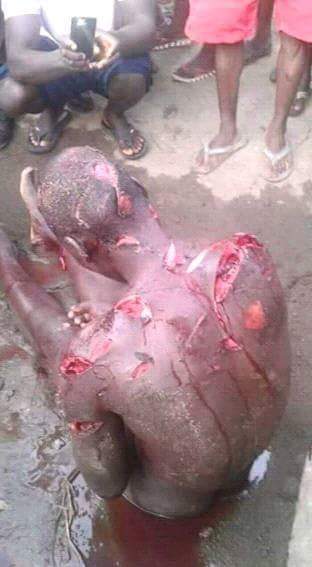 Man's inhumanity to man. The student of Abdu Gusau Polytechnic, Talata-Mafara, Zamfara that was accused of blasphemy by Islamic fanatics. Attempt to save him led to the burning to death of 8 persons and curfew was imposed on the town.

The Zamfara State Police Command had lifted the curfew imposed on Talata-Mafara and its environs on the August 22, following violent attack that led to the killing of eight persons.

This is contained in a statement signed by the command Public Relations Officer (PPRO), DSP Shehu Muhammad in Gusau on Saturday.

Muhammad advised parents to ensure that their children remain law abiding and warned that anyone caught causing trouble would face the full wrath of the law.

The Police had on 22 August imposed a dusk to dawn curfew on Talata-Mafara following a mob attack that killed eight persons over alleged blasphemy against Islam by a student of Abdu Gusau Polytechnic, Talata-Mafara, Zamfara.

The student was alleged to have made a blasphemous statement against Islam and Prophet Muhammad and was attacked by a mob.

The student was beaten to a pulp by the mob, and a man identified simply as Tajudeen, took him in his car and drove him to a hospital.

Enraged by the act of the man who rescued the student, a witness disclosed that the mob moved to his (Tajudeen’s) house, set it on fire and killed eight persons.

The governor, who called for an emergency security council meeting over the incident, expressed sadness and vowed that “no stone will be left unturned until all those behind this act are brought to book.”

Following the incident the police imposed a 12-hour curfew in the community, from 7p.m. to 7a.m. daily.