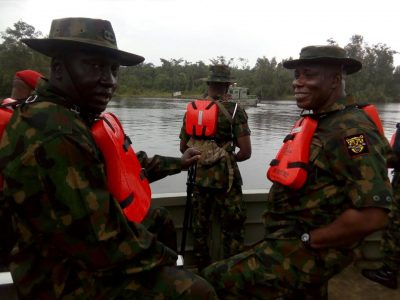 Soldiers of the Operation Crocodile Smile

The people of Akperhe Community, Ughelli South Local Government Area of Delta, jubilated on Tuesday following the release of the last three persons arrested by the military in the ‘Operation Crocodile Smile’.

The military had accused them of having link with the militants, but released the septuagenarian on Sept 4.

The remaining three were released from the military police custody in 3 Battalion, Effurun Nigerian Army Barrack at about 2:00 p.m.

Responding, Mr Goddy Akpojotor, elder brother to Koko one of the freed detainees expressed joy at the freedom.

“The three others were released to us today unconditionally. Akperhe has been in jubilation, we give glory to God,” he said.