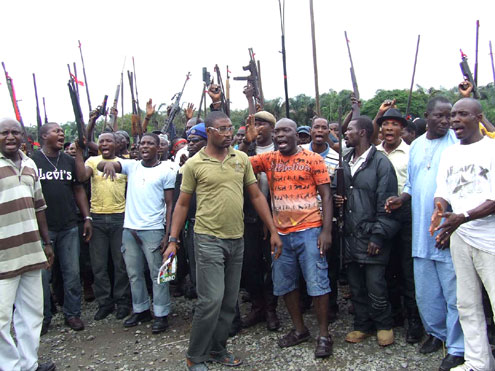 The former Niger Delta militants, under the Amnesty Programme have appealed to the Federal Government to pay their three months outstanding stipends.

Mr Ramsey Mukoro, leader of the third phase of the amnesty scheme, said that his group had not been paid for the past three months.

The Chairman of the second phase in Bayelsa, Mr Ebina Salvation, in a statement in Yenagoa on Monday, said the non-payment of the stipends was a burden to ex-agitators.

Salvation noted that the existing peace in the Niger Delta was as a result of the amnesty programme.

He said that the delay in the payment of stipends to ex-militants was regrettable, adding that protests from them could endanger the peace.

Salvation, therefore, pleaded with the government to release adequate funds to the Amnesty Office for effective implementation of the programme.

He also urged the Federal Government to go back to the blueprint of the amnesty programme and implement its content by interfacing with the Coordinator of the scheme, retired Brig-Gen. Paul Boroh and the ex-agitators.

Salvation restated that the Amnesty Office under the leadership of Boroh was doing well and therefore should not be blamed for the delay in the payment of their stipends.

“We, therefore, describe the allegations of the faction as false, baseless, mischievous and wicked.

“The allegations lack substance and should be thrown to the dustbin of history by all right thinking persons.

“We, therefore, urge members of the group to discountenance, Stephen Ebisintei’s, display of falsehood which is a figment of his imagination and that of his co-travelers,” he said.

Salvation maintained that the CBN was not Amnesty Phase 2 Office but bank accountable and rendering services to all Nigerians, both nationally and internationally.

He, therefore, called on the security agents to be alert, urging them to find out from amnesty office the recognised leadership of the Phase to enable them to stop people using the name to issue unnecessary threats and publications.

“That is the only way to hold people responsible if anything happens. Our leadership is enlightened, reasonable, law abiding and has respect for elders and the government,” he said.

Mr Piriye Kiyaramo, Liaison Officer at the Bayelsa Office of the Amnesty Officer, declined comments when contacted for reaction on the outstanding stipends.