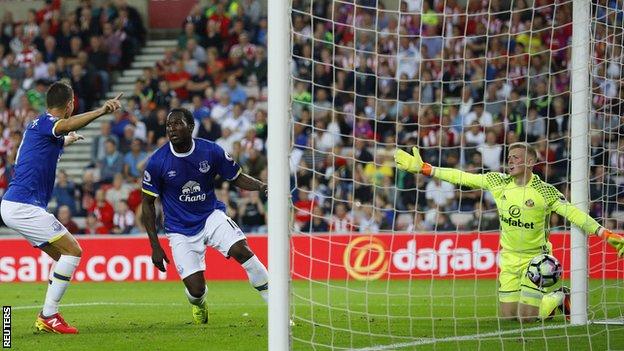 Lukaku scored one of his goals

Romelu Lukaku scored an 11-minute hat-trick as Everton maintained their unbeaten start to the season with a win at Sunderland in the Premier League.

The Belgium striker netted his first club goal since March with a header from Idrissa Gueye’s cross, then nodded home Yannick Bolasie’s delivery.

He ensured three points for his side with a low finish after running clear.

Jermain Defoe shot over for Sunderland, who are yet to win in the league under former Toffees manager David Moyes.

With only one point from the first four matches, only Stoke’s inferior goal difference keeps Sunderland off the bottom of the table.

The victory was Everton’s third from their opening four games and they climb to third.
Lukaku ends his drought in style

If there had been one negative during Ronald Koeman’s impressive start as Everton boss it was the continued poor form of the club’s formerly prolific leading marksman Lukaku.

Since scoring twice in the FA Cup quarter-final against his former side Chelsea on 12 March, the 23-year-old had gone 1,139 minutes without a goal, despite 40 efforts.

It looked as though it was going to be another frustrating outing for Lukaku, who saw a header tipped over by home keeper Jordan Pickford before poking Seamus Coleman’s driving cross wide from eight yards during a first hour showcasing plenty of good intent but precious little execution to match it.

However, once the home side had given him a helping hand by leaving him completely unmarked to head in the first from close range there was no stopping him.

His second and third – which saw him latch on to Kevin Mirallas’ ball before slotting in past Pickford – followed soon after as Sunderland’s challenge evaporated in the face of a confident and composed away side.

Lukaku could have ended the night with five goals but he struck the bar with one rising shot from inside the box and a second, similar effort was also too high.