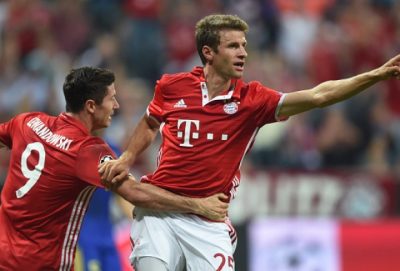 Bayern Munich players celebrate one of their goals

Joshua Kimmich stabbed in and quickly added a header as Bayern boss Carlo Ancelotti became the first man to manage seven clubs in the competition.

After beating the Russian side, Ancelotti, who has won the tournament three times as a manager, said: “Can we win the Champions League?

“For sure our team will be competitive this season and for the moment everything is good, but the first objective is to win the group, and then we will see the draw.’’

In another match in the same competition, Atletico Madrid won 1-0 at PSV in Group D’s other game.

Saul Niguez’s scissor kick from 18 yards proved decisive for Atletico, who had goalkeeper Jan Oblak to thank for saving Andres Guardado’s penalty kick on the stroke of half-time.

In Group B, Anderson Talisca produced a stunning free-kick in the third minute of added time to earn Besiktas a 1-1 draw against his parent club Benfica.

“It’s a draw that feels like a victory,” said Besiktas midfielder Ricardo Quaresma.

Talisca’s strike in Lisbon leaves both sides adrift of Napoli, who came from behind as summer signing Arkadiusz Milik struck twice in nine minutes.

It was enough to overhaul Dynamo Kiev’s lead before half-time in Ukraine.

The Italian side netted with their only two shots on target against Kiev goalkeeper Oleksandr Shovkovski, who became the second-oldest player in Champions League history at 41 years and 255 days.

Bulgarian side Ludogorets — in the Champions League group stage for the second time — faced 14 shots at Basel but left Switzerland with a 1-1 draw.

They matched the other result in the group between Paris St-Germain (PSG) and Arsenal in Paris.

Barcelona produced the stand-out result of the night as Lionel Messi struck a hat-trick in a 7-0 win over Celtic.

The other fixture in Group C between Manchester City and Borussia Monchengladbach has been rescheduled for Wednesday due to adverse weather.