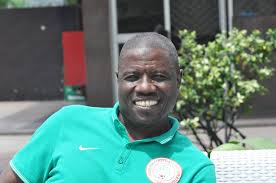 One-time coach of the Flying Eagles, Tunde Disu, and an ex-international Bright Omakro, have commended the confirmation of Salisu Yusuf as Super Eagles Head Coach by the Nigeria Football Federation (NFF).

Yusuf had after a meeting with the board of NFF on Tuesday, yelled out: “I have been offered a contract. So, I’m happy to continue with the job’’.

Disu said that Yusuf’s appointment was a welcome development to Nigerian football, adding: “I think the country needs someone like him who has travelled far and wide in the country.

“He is of a dependable quality which I can vouch for. He worked under me as assistant when I was the coach of Lobi Stars of Markurdi but before then, he played under me from 1987 to 1989.

“He has proven to be a highly technical person whose job of handling the national team can be left to; more so, he understands the local league.

“Yusuf has handled some of the local teams, Enyimba International of Aba inclusive,’’ he told NAN.

“Another thing about him is his gentleman’s character, he is calm. I don’t think he will give NFF any trouble, maybe the reason for them to have appointed him in the first instance.

“Yusuf has never hid his passion for the national team, it is a team he loves to be with and the players are also in his support.

“It is a good thing that NFF is encouraging the local coaches to handle the national teams because they know the players better, obviously because they have handled some of them before.’’

“Yusuf has impeccable Curriculum Vitae well enough for the job of the Super Eagles,’’ he said

Reacting, an ex-international player, Bright Omokaro, urged support from stakeholders to enable the coach achieve success in the task.

“Yusuf has a very good record as far as coaching is concerned and he has proven himself over time. The only thing that will make him succeed is massive support.

“His confirmation is commendable; he understands Nigeria’s football and his experience will guide him as he tries to build a formidable team,’’ the ex-international said.

Omokaro, popularly known as 10-10 and member of the 1994 AFCON winning squad told NAN that Yusuf’s confirmation would encourage him to work harder for the Russia 2018 World Cup.

“With this development, he has to go all out to ensure that we qualify.

“Nigerians need him to win his next qualifying match against Algeria,’’ the former defender said.

Nigeria will host Algeria in the first leg of its qualifying campaign scheduled to hold on Nov. 7.

NAN reports that Kaduna State-born tactician, was a former midfielder for Ahmadu Bello University FC, and later became a coach.

He started his coaching career with Nassarawa United FC in 2002.

He, however, moved to Lobi Stars FC as an assistant coach and won the Challenge Cup (now Federation Cup) in 1999.

Yusuf was employed as assistant coach to Samson Siasia. He also assisted the late Stephen Keshi.