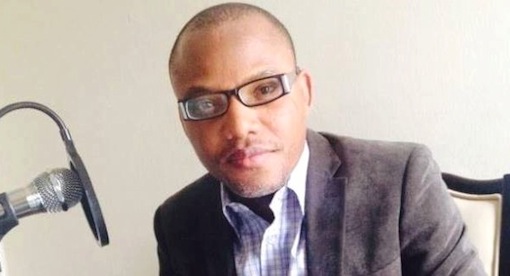 Justice Binta Nyako of the Federal High Court, Abuja on Thursday declined to grant the bail application filed by Nnamdi Kanu, the self acclaimed leader of the Indigenous People of Biafra (IPOB).

Others standing trial with Kanu are: Chidiebere Onwudiwe, Benjamin Madubugwu and David Nwawusi.

Delivering her ruling on their bail application, Justice Nyako held that the charges against the defendants “are very serious in nature and therefore not ordinarily bailable.’’

She said, “Irrespective of what the charge is, the court has to exercise its discretion one way or the other.”

She added that the charges against the defendants could attract life imprisonment if proved by the prosecution.

The trial judge also dismissed the contention by the defendants that President Muhammadu Buhari had openly directed that they should not be released on bail.

She held that being a citizen of Nigeria the Buhari was at liberty to exercise his freedom of speech.

According to her, the President lacks the capacity to influence the decision of the court.

She said that the defendants did not place any new fact or law capable of persuading the court to reverse an earlier ruling which denied them bail.

“The offences are serious in nature and carries very severe punishment if proven.

“I hereby therefore refuse bail for the applicants.

“In the alternative, I order for an accelerated trial of this matter to commence immediately which will not be more than two months,” the Judge said.

Kanu and the three other defendants were charged for treasonable felony, managing an unlawful society, publication of defamatory matter, illegal possession of firearms and improper importation of illegal goods.

They were also accused of broadcasts on Radio Biafra and agitation for secession from Nigeria.

Meanwhile, Mr Suleiman Labaran, Counsel to the Federal Government, prayed the court to allow all government witnesses testify behind the screen.

Labaran also prayed the court not to reveal in any record of the court, the identities of the witnesses put forward by the federal government.

However, Counsel to Kanu, Mr Ifeanyi Ejiofor, opposed the prayers.

He contended that granting such requests would amount to gross violation of the defendants’ rights to fair hearing.

“We vehemently oppose secret trial of the defendants.

“They were accused in the open; we also request that they be tried in the open. The defendants need to see those testifying against them eye-ball-to-eye-ball.

“We are ready for this trial,’’ Ejiofor said.

Another defence lawyer, Mr Maxwell Okpara, told the court that majority of the proposed witnesses by the federal government are foreigners imported from neighbouring countries.

“My lord, we have uncovered their plan to bring Ghanaians and people from Cameroon to appear in this court to testify against the defendants.

“We as Nigerians will resist that plot. It cannot work; that is why they are insisting that they should testify behind screen, the plot has failed,’’ Okpara said.

The Judge fixed Dec. 13 to rule on the application of the federal government to allow its witnesses testify behind the screen.