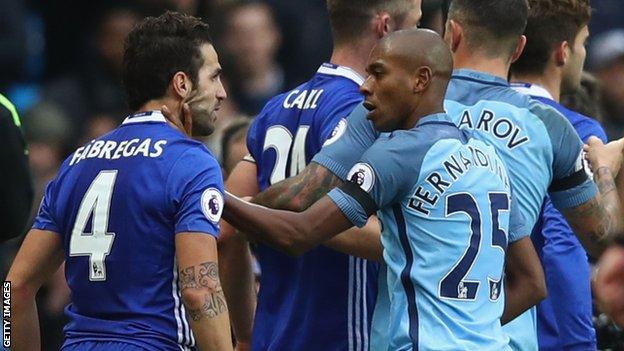 Fernandinho was sent off for grabbing Cesc Fabregas

Chelsea have been fined £100,000 and Manchester City must pay £35,000 after players from both teams clashed during their Premier League meeting at Etihad Stadium earlier this month.

Tempers flared at the end of Chelsea’s 3-1 win, after City’s Sergio Aguero was sent off for a tackle on David Luiz.

Aguero’s team-mate Fernandinho was also dismissed, after grabbing Cesc Fabregas as the two teams confronted each other.

Chelsea had previously been warned they could face a points deduction.

The Premier League leaders have been fined six times since February 2015 for failing to control their players.

After the Blues were fined a record £375,000 – reduced to £290,000 on appeal – in the wake of an ill-tempered meeting with Tottenham in May, the Football Association appeal board warned “the time cannot be too far distant when… the only proper sanction is a points deduction”.

However, manager Antonio Conte laughed off the possibility of a points deduction on Sunday, asking reporters if they were joking when asked if he thought the incident could harm the club’s league standing.

The last top-flight teams to be docked points for disciplinary issues were Manchester United and Arsenal, in the wake of a brawl at Old Trafford in October 1990.