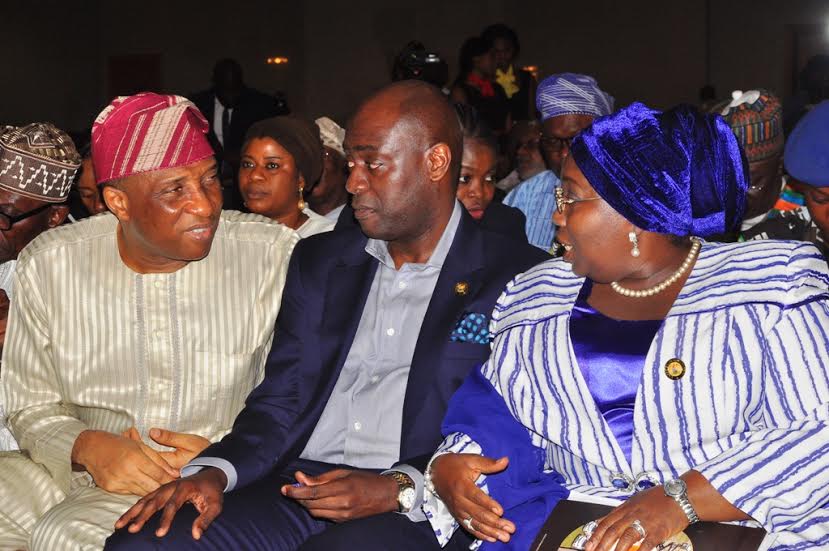 Lagos State Governor, Mr. Akinwunmi Ambode on Tuesday said the State Government would continue to take the front seat in ensuring that security agencies in the State, especially the Police are well equipped to continue to safeguard the lives and property of Lagosians.

The governor, who spoke at the 10th Town Hall Meeting on Security held at the Civic Centre, Victoria Island, Lagos, Southwest Nigeria, organised by the Lagos State Security Trust Fund (LSSTF), said though security is an expensive business, his administration would continue to make the necessary sacrifice that would ensure that residents, visitors and investors in the State can feel safe to move about and carry out their lawful businesses.

He said the LSSTF, established 10 years ago to fill the gap in the equipment, training and logistics deficiencies for security agencies operating in the State has however been limited by lack of resources to provide the needed equipment to wage war against all forms of criminal activities.

Ambode, who was represented by his Deputy, Dr. Mrs. Oluranti Adebule, said the State was extremely proud of the support it has received so far from the private sector, noting that through the Trust Fund, they have so far demonstrated the understanding that security was indeed everybody’s business and a high sense of corporate social responsibility.

“We have improved security in our State and we are very grateful to all those who have committed to making contributions to the Fund over the years. Our collective efforts have also made our security model a standard for others to follow,” he said.

The governor recalled that the efforts of the State Government in supporting security agencies recently came to fore in Johannesburg, South Africa where the Rapid Response (RRS) Squad of the State Police Command was awarded “Best Anti-Crime Police Squad in West Africa” while the Commander RRS, ACP Olatunji Disu, was awarded “Most Outstanding Police Operational Officer in Africa” just as the Lagos State Government got the award for “Best Security and Most Safety Conscious State in Africa”.

He, however, said that the successes achieved so far must be sustained, saying that it would require more concerted efforts from the private sector to complement government’s efforts in equipping the security agencies with modern equipment.

“In recent times, we have had to deal with a few more untraditional crimes such as kidnapping and terrorism. These crimes, coupled with the harsh economic condition in Nigeria has made our security situation even more challenging. The truth is that it is our collective resolve that has protected us from unimaginable security breaches.

“Security is today a big challenge for most key city-States in the world even with the most sophisticated security apparatus. We must therefore salute the gallantry and collaboration of our various security agencies for using the assets we have provided for them to protect us.”

“I wish to state that our government would continue to take the front seat in supporting our security agencies in the state. But you all must also play your part as responsible citizens of Lagos to ensure the future worthy of the Centre of Excellence”, Ambode said.

In his welcome address, the Chairman of the LSSTF, Mr Oye Hassan- Odukale, said that the Fund has fully come of age as an organisation that is fully committed to the safety and security of all Lagosians.

Executive Secretary/CEO, Dr. Abdurrazaq Balogun, said the security in the State has improved drastically owing to the interventions by the State Government through the donation of equipment worth over N1.6 billion in the last one year with private sector support of about N440 million in cash and 19 patrol vehicles.

Also in his presentation, the State’s Commissioner of Police, Fatai Owoseni, explained that against the backdrop of numerous challenges, Lagos State witnessed tremendous improvement in crime management, adding that in assessing the state of safety and security, Lagos can be adjudged as relatively peaceful and secured.

One of the discussants and a former Assistant Inspector General of Police, Umaru Manko, said the idea of Lagos State Security Trust Fund, has given leverage to policing in the State, adding that Lagos has over the years shown its capacity to successfully run state policing.

At the meeting, corporate organisations, individuals and stakeholders made donations towards the sustenance of the Lagos State Security Trust Fund.