PSG fail to close gap with 2-1 defeat to Guingamp 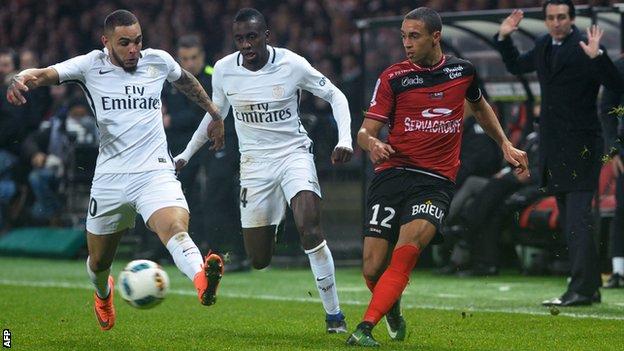 Paris St-Germain failed to close the gap on Ligue 1 leaders Nice, with defeat at Guingamp increasing the scrutiny on boss Unai Emery.

Yannis Salibur put Guingamp ahead when he broke clear of the champions’ defence and slotted home, before Nill de Pauw added a second on the break.

Edinson Cavani pulled one back with a close-range finish with 10 minutes left but PSG could not find an equaliser.

They are four points behind leaders Nice, who host Dijon on Sunday.

Former Sevilla coach Emery succeeded Laurent Blanc in June, but has come under pressure after a difficult start to life in the French capital.

PSG, who are bankrolled by the Qatar Investment Authority, have lost four matches in Ligue 1 this season compared with just two in the whole of the 2015-16 campaign.

They have won the title in each of the past four seasons.