No going back on democratic dividends for grassroots-LASG 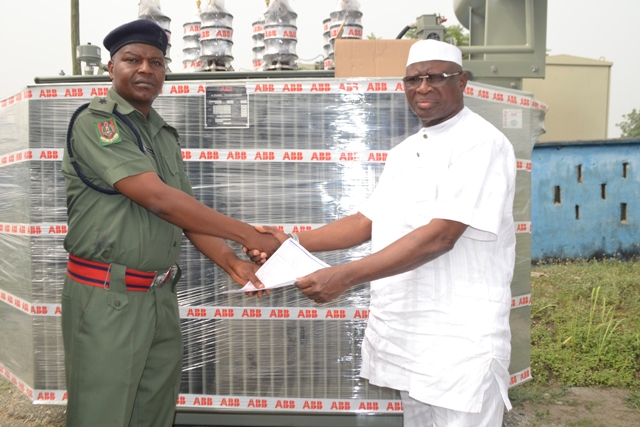 Lagos State Government has restated its determination to deliver the dividends of democracy to people at the grassroots in the state.

Commissioner for Local Government and Community Affairs, Muslim Folami said this on Thursday during the hand-over ceremony of a new 2.5MVA and 33/11KV capacity Transformer to the 243 Recce Battalion, Army Barracks, Ibereko in Badagry, Lagos, Southwest Nigeria.

Folami stated that the barracks requested for the transformer due to the electricity challenges they had been facing in the last two years, saying that due to Governor Akinwunmi Ambode’s magnanimity, he responded swiftly by ensuring that electricity was restored to the area without further delay.

According to him, the state government had also delivered six different transformers of various capacities to various communities, adding that 10 transformers would also be handed over to other communities very soon.

He said that the transformer would be beneficial to the entire populace within the barracks and its environs in a bid to boost the economy.

“The state government will not relent in ensuring that all the infrastructural amenities were adequately put in place,” he said.

The Commanding Officer, 243 Recce Battalion, Ibereko, Barracks, Lieutenant Kolo Ibrahim, thanked the state government for the gesture, saying that the transformer would certainly solve the issue of electricity challenges which they had faced in the last two years.