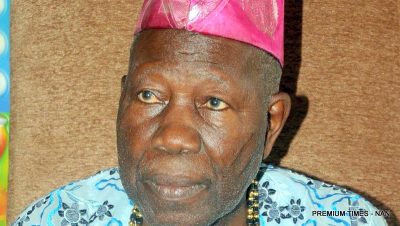 The apex body of traders in Ibadanland known as Ibadan Joint Traders Association, IJTA, on Tuesday refuted the removal of the Iyaloja of Ibadanland, Chief Mrs. Labake Lawal.

The traders at a press conference held at the Association House, Labowo market, described the removal as a lie and a calculated effort by some disgruntled elements in the association to cause confusion, rift and enemity among the traders.

It would be recalled that last week, a faction of the Ibadan Joint Traders Association led by Alhaji Dauda Oladepo announced the removal of Alhaja Labake Lawal as the Iyaloja of Ibadanland over alleged gross misconduct and financial impropriety.

In a swift reaction, Mr Adeola Oloko, the spokesperson of Olubadan of Ibadanland, Oba Saliu Adetunji Aje Ogungunniso 1, debunked the sack of Alhaja Lawal as Iyaloja of Ibadan on the ground that if there was anything like that, it did not follow due process.

The traders described the purported removal of Lawal as a coup against the wish of the traders, stressing that it was aimed at causing a rift between the Iyalode and Iyaloja of Ibadanland.

The traders said under no condition would Iyaloja who represents a sacred institution be bold enough to rub shoulder with Iyalode who is her mentor, mother and counsellor.

Speaking at the conference, the Secretary of the board of trustees of the association, Alhaji Waheed Apanpa accused Alhaji Dauda Oladepo of being the mastermind of the confusion in the association. He described him as a cankerworm in the lives of all market traders.

At the meeting, Alhaji Apanpa announced the immediate suspension of Oladepo from every activity of the traders’ association until further notice.

“As you are all aware, there have been various write-ups, both on the traditional and social media as regards the purported removal of Chief (Mrs.) Labake Lawal as the Iyaloja of Ibadanland. Let me state here categorically that it was all a lie, a calculated effort by some disgruntled elements in the association to cause confusion, rift and enemity among the Ibadan Joint Traders Association.

”Two, the news also goes further to say that there is disagreement between the Iyalode and Iyaloja of Ibadanland, this is another big lie and a fruitless effort to stage a coup in an age like this. Let me state here that the Iyaloja can never and will never look the Iyalode in the face. She represents an institution that is sacred and the Iyaloja, Chief Mrs. Labake Lawal has always looked up to her as a mentor, mother and counselor in all ramifications”.

“That Mr. Dauda Oladepo went about to announce the removal of Chief (Mrs.) Labake as the Iyaloja of Ibadanland is an aberration, an abomination of the highest order and a nullity in deed. It is sacrilegious and an insult on the institution of the Olubadan-in-council and the Olubadan of Ibadanland, Oba Saliu Adetunji Ajeogunguniso 1. How can someone wake up and announce the dethronement of a chieftaincy title conferred legitimately by the highest revered, and highly respected Olubandan-in-Council on somebody else with impunity and disregard. This must be stopped and such offender must not go scot free without being punished to serve as a deterrent to others. Therefore, going by the enormity of the accusation and the aim to bring the traders to disrepute and at loggerheads with Ibadan traditional institution, I, as the Secretary of the board of trustees of the association and with the consent of the market leaders and stakeholders, hereby announce the suspension of Mr. Dauda Oladepo from the association until further notice. The suspension is with immediate effect,” Apanpa stated.

He went further: “It was alleged by these disgruntled elements that Chief (Mrs.) Labake Lawal mismanaged the finances of the association, hence Oladepo and his group resorted to personally malign and destroy her through the social media. We then ask for whose interest? It was all a calculated effort to stage a coup and just because Chief (Mrs.) Labake put the interest of the members at heart, protecting their interest and not allowing the scavengers, hawks and self centred Dauda Oladepo to have his way to loot and cart away the association’s money, he resorted to acts of brigandage and lost his soul to the devil. At a time when accountability, transparency, equity and justice are being preached to put our nation forward which Chief (Mrs.) Labake Lawal epitomizes, Dauda Oladepo is the opposite.”